How Few Control the World

Who is who sharing the Covid Pandemic Profit?

Big Brother is Watching You

Who really control the world? Systems analysts say it is a unique effort to untangle control in the global economy. And to find out who those really are; The Illuminati? Freemasons? The Bilderberg Group? Or are these all red herrings to distract your prying eyes from the real

global elite? The answer, like most topics worth exploring, is not quite so simple. Have no doubt, there are secretive global powers whose only goal is to keep and grow that power. But it really may not be as secretive as you’d think. And that’s what makes it even more criminal…

“Facts do not cease to exist because they are ignored.”

And, Henry Ford once quipped;

“It is well enough that people of the nation do not understand our banking and money system, for if they did, I believe there would be a revolution before tomorrow morning.”

Every major geopolitical decision of the last five decades has been run through one of these four organizations: the Bilderberg Group, the Trilateral Commission, the Council on Foreign Relations and the World Bank/International Monetary Fund (IMF).

“From a massive database of 37 million companies, Glattfelder pulled out the 43,060 transnational corporations – companies that operate in more than one country – that are all connected by their shareholders. Digging further, he constructed a model that actually displays just how connected these companies are to one another through their ownership of shares and corresponding operating revenues.” 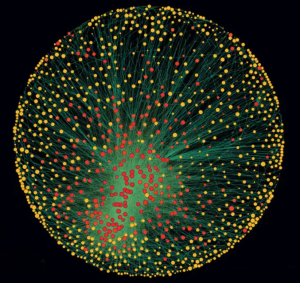 Above image is a chilling one that looks like some sort of intergalactic light globe. Glattfelder has done a remarkable job of boiling these connections down to the main actors — as well as pinpointing how much power they have over the global market. These “ownership networks” can reveal who the key players are, how they are organised, and exactly how interconnected these powers are. From New Scientist:

The top 49 corporations are financial institutions, banks, and insurance companies — with the exception of Wal-Mart, which ranks at number 15… The rest essentially just push money around to one another. The interconnectedness of the top players in this international scheme, are:

The number one player is Barclays: “Barclays was a main player in the LIBOR manipulation scandal, and were found to have committed fraud and collusion with other interconnected big banks. They were fined $200 million by the Commodity Futures Trading Commission, $160 million by the United States Department of Justice and £59.5 million by the Financial Services Authority for “attempted manipulation” of the Libor and Euribor rates. Despite their crimes, Barclays still paid $61,781,950 in bonuses over that same year, including a whopping $27,371,750 to investment banking head Rich Ricci. And yes, that’s actually his real name…”

These are the guys that run the world. “It’s essentially the “too big to fail” argument laid out in a scientific setting — only instead of just the U.S. and U.K. banks, we are talking about an international cabal of banks and financial institutions so intertwined that they pose a serious threat to global economics.” Effectively, instead of “too big to fail,” these are “too connected to fail”…

If this information is linked with the ones behind the fake Covid Pandemic specifically Big Pharma involvement, it is getting even more weird;

Who is Who that Share the Covid Pandemic Profit?

A French FWC-reader searched for who is who of shareholders it was found that the main shareholder of Pfizer is Vanguard Group, as listed above in the top 10 league.

The main  shareholder of Johnson & Johnson is Vanguard Group

Vanguard Group is an American pension fund. It manages about $ 7 trillion, more than the GDP of France and Germany combined. At the international lobby level, it should have great influence..

And then the supporters of the lobby are:

Vanguard Group is only the 2nd shareholder from Amazon. Basically, GAFAM is the one. So at the lobby level to sell us something, no doubt that is very, very powerful.

GAFAM is the acronym used to refer to American tech giants Google, Apple, Facebook, Amazon and Microsoft. Together, they hold five of the six top spots in a listing of the world’s most valuable public corporations.

And then, Akamai is the largest shareholder in the Vanguard Group.

Akamai is the world’s largest digital data storage company. It is this company that, together with the national printing office, the data stores of the entire anti-Covid operation and thus also manages the data of the QR code used at all points where it is applied, including the sanitary pass.

Further to make people ill, here are some other supporters for that job;

The first shareholder of Coca-Cola is Vanguard Group.

And finally the icing on the cake;

The first shareholder of Philip Morris is Vanguard Group.

Philip Morris is the world’s largest tobacco manufacturer. Tobacco kills 8 million people a year with state endorsement. And in countries where it can, its prime target is children. Ironically, one of Pfizer’s most cost-effective drugs is Champix, a smoking cessation drug …

What is the risk associated with Champix? The most common side-effects with Champix, seen in more than 1 patient in 10, are nausea (feeling sick), insomnia (difficulty sleeping), abnormal dreams, headache and nasopharyngitis (inflammation of the nose and throat).

The health or vaccination pass with 3 doses at € 19.50 in 6 months for 50 million French people, makes $ 2.975 billion, just for France, for above listed pharmaceutical companies and therefore indirectly for Vanguard Group aided for by Google, Facebook and Phillip Morris.

Do some homework; and find out who are the main shareholders of Vanguard Group?