The ECB again has opened the valves and let another trillion euros worth of liquidity flow directly into the very same banks that have proven they can’t be trusted with a cent. This is how a zombie system works; the workers give, the monsters get it. Since, at this stage of the credit cycle, the employed don’t have much to give, the ECB turns on the printing presses. But, from whom does the money come? The rational thinking is; it comes from someone, but that isn’t the case. 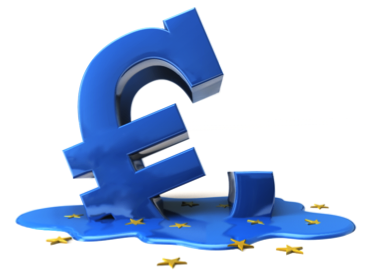 The truth is – when money is borrowed, it comes from the people who lend it. When it is taxed, it comes from the taxpayers. But from whom does it come when it just is printed up? Well, at first it appears to come from no one. Nobody reaches in his pocket to find fewer euros. Nobody’s pocket has been picked. But how could that be? Nothing comes from nothing. When a zero is added to a zero it still remains a zero.

And yet, the zombie banks now have one trillion more euros in their vaults. That’s what was said in the Financial Times some time ago. “Banks snap up one trillion euros in ECB loan offer.”

This money certainly seems real. The banks can lend it. Spend it. Toss it out the window or down the drain. They can light cigars with it, and drink expensive wines. They can use it to buy anything. As did three former top executives at the Caja Madrid savings bank that went bust, they are now being targeted by Spain’s High Court in an investigation into €15.5 million in bank funds that were spent using undeclared credit cards for private use.

One of the ex-bank officials under scrutiny is Rodrigo Rato, a senior Popular Party (PP) official who headed the International Monetary Fund (IMF) between 2004 and 2007. Rato was chairman of Caja Madrid and of Bankia, the lender that was created from the merger of Caja Madrid and six other bankrupt savings banks. The other two targets of the investigation are former chairman Miguel Blesa and former general director Ildefonso Sánchez Barcoj.

“Details have emerged about the 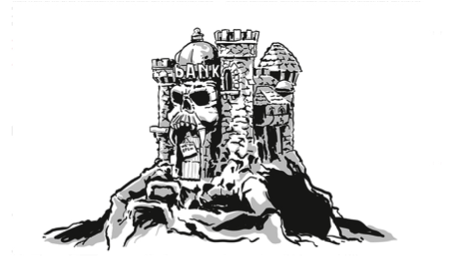 €15.5 million in company funds spent by members of the board of directors at the Caja Madrid savings bank using undeclared credit cards between 2003 and 2012. A breakdown of the credit card accounts seen by EL PAÍS shows that Miguel Blesa, the former chairman of Caja Madrid, spent more than €10,000 alone on wine, and that in 2008 he used the card to pay for a €9,000 vacation to South Africa. He also ran up bills of €2,000 on watches and meals at upscale restaurants. In total, Blesa spent €436,000 using company credit cards, around €54,600 a year, according to bank documents. He is now the target of an investigation into mismanagement at the bank during his tenure as chairman, a post for which he was paid €3.5 million a year.”

However my main concern is not where this money goes but where it came from. Did it come from space, from another planet? No? Then, doesn’t someone own all the wealth on earth? Yes? Then, it must have come from some humans somewhere on Earth. But from whom came it?

The answer is: Each unit of currency represents a claim on resources. To put this in more perspective; for example a brand new BMW 7 series will cost in round figures €100.000 so one trillion buys 10 million of these cars. In other words, there are enough new euro’s to claim 10 million new BMWs. This implies that people who had claims on them previously have less of a claim now, because there are only so many new BMWs available.

And since those claims arose from the value of the currency they earned and saved, it implies that the value of the new money must have been stolen out of the value of the old money. What else can it be called but theft? People who had euros previously now have less purchasing power – at least theoretically. They never agreed to let their money be clipped. Worse they never even knew what was happening to them.

And since EU is in a recession – and since recessions are basically deflationary – prices fall as demand eases – the old currency holders aren’t likely to notice – or complain about it. It may be a serious theft, worse it’s a grand THEFT, and it’s an incredible stealing. It is the perfect heist. The poor victims don’t even know they are victims. They have as much money in their pockets and bank accounts on Friday as they had on the previous Monday. And if prices rise slightly, not one in a hundred will blame the ECB.

Back to Square One:

But at least one guy has it right; his name is Beppe Grillo the founder and leader of the “five star movement” (M5S) in Italy. He will collect one million signatures required to petition the Parliament to conduct a referendum on Italy leaving the Eurozone as soon as possible. He argues the Italian government is not effective in restoring jobs and helping people. Italy’s anti-establishment M5S, which came onto the political scene last year winning 25 per cent of the vote in its first parliamentary election in 2013. Grillo told his supporters last week at a M5S event in Rome.

“Leave the euro and defend the sovereignty of the Italian people from the European Central Bank,” – “We have to leave the euro as soon as possible,” –“We will collect one million signatures in six months and bring them to the Parliament to ask for a referendum to express our opinion.”

Grillo hopes his party’s recent success and growing support will allow them to gather enough signatures and push the idea through the Parliament by December 2015. Grillo said: “This time, we have 150 parliamentarians and senators, and we have time to submit [the signatures] to the Parliament and adopt a law on the referendum,” referring to 109 seats out of 630 in the Chamber of Deputies and 54 seats out of 315 in the Senate that his party holds.

The constitution of Italy prohibits popular referendums on financial 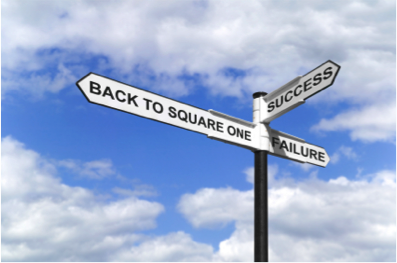 laws and ratifications of international treaties, but in any case the move will send a clear message to the government, Grillo believes.

At a time when unemployment in the Eurozone’s third largest economy is running above 12 per cent and all-time high of 44 per cent for Italians under the age of 25, Grillo’s belief in direct participation through forms of numerical democracy might be the only way to get the Italian frustration across.

Although the IMF predicts Italy’s recession will break in 2015, when the growth is expected to reach 1.1 per cent, the country is struggling to keep its budget deficit below the EU’s cap of 3 per cent of GDP. Which is another blatant lie as no one is able to predict the future, unless they manipulate the future.

The economic crisis may see Italy abandoning euro and returning to lira, says comedian-turned-politician, Beppe Grillo, who’s anti-establishment Five Star Movement became a major power in the country’s politics after the last general election. In his interview with German Focus magazine, Grillo urged for the renegotiation of Italy’s €2-trillion debt, which is the second highest in the euro zone after Greece, at 127 per cent of gross domestic product (GDP).
“Right now we are being crushed, not by the euro, but by our debt. When the interest payments reach €100 billion a year, we’re dead. There’s no alternative,” the 64-year-old said.
According to the Five Star Movement leader’s forecast, the Italian political system has “only six months” left before it collapses and the state will no longer be able “to pay pensions and public sector salaries”. If there’ll be no changes to the debt obligations, Grillo believes, the option for his country would be to leave the euro and return to it’s former national currency, the lira.
“If I’ve bought shares in a company that goes bankrupt, then that’s my bad luck. I took a risk, and lost, “he explained, drawing a comparison with the private market. “If the conditions remain the same, Italy would leave the euro and return to the lira.”

Beppe Grillo was a popular comedian on Italian television in 80s, but he disappeared from the screen in the 90s, with many suggesting that his harsh satire was too much to handle for Italian politicians. After that he mainly performed in theatres and staged a series of mass rallies, protesting against the criminal activities of the Italian political elite.

The negative effects from EU policies:

According to Spain’s official statistics office, the Instituto Nacional de Estadística, in 2008 the average 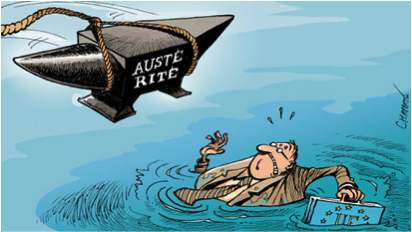 That’s a pretty steep decline, but it tells only part of the story because these figures take no account of inflation. Prices in Spain went up about 9.5% between 2008 and the end of 2013. This means that simply to keep up with rising prices a person would, in theory, have needed to spend nearly €35,000 in 2013 to buy the same quantity of goods and services that €31,711 would have bought in 2008. But instead of going up by 9.5%, household spending dropped by 14.5%. After allowing for inflation, Spanish households spent very nearly 22% less in 2013 than they did five years earlier.

When an average falls that far that fast, it is a safe bet that very large numbers of people are cutting their spending to the bone. And when we consider that, thanks largely to the collapse of its construction boom, Spain now has adult unemployment of about 25% – three times the level in 2007 – and joblessness among the under-25s of nearly 54%, it comes as no surprise.

Very similar things are happening right across the southern part of the Eurozone, but nowhere more brutally than in Greece, where adult unemployment stands at about 27% and youth unemployment is double that.

The prospect of inflation turning negative, which means deflation, for any length of time is one that alarms the great and good of the world economic order, so much so that few of them like to speak openly about it.

In some places, it has already arrived. Greece’s inflation rate has been 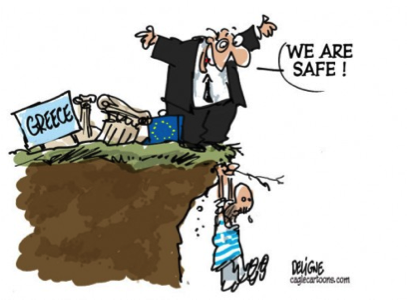 slightly negative for more than a year; in Portugal inflation has been negative for 10 of the past 12 months; inflation in Spain weakened significantly about a year ago and has been bouncing around zero ever since, with the most recent monthly readings the weakest so far. Italy, meanwhile, now seems to be heading down the same path, recording its first ­negative year-on-year inflation figure in August, at -0.09%.

It’s clear the euro and the EU were put up on us, to enrich the Illuminati, and to let most of the people suffer in poverty. They aren’t interested in solving the crisis; if they wish to do that they could do so overnight. The stolen wealth form the population by the private central banks that are owned by the bloodline families, amounts to $70 million per every person today living on the planet Earth.