Political correctness (PC) is part of the Illuminati’s Control System that is introducing ever more laws, taxes and financials demands to tie the human flies to their web, with the objective mental decline and enhanced mind control. PC means using words or behaviour, which will not offend any group of people. Most people think it is important for everyone to be treated equally, fairly and with dignity. Some words have been used for a long time that is unkind to some people. Every so often these words now are or have been replaced by other words that are not offensive, which is deliberately an on going process to reduce even more people’s freedom. Under the argument the new words are described as politically correct. The term also is used in a mocking sense when attempts at avoiding offense are seen going too far.

The programming of the government’s useful idiots and administrators at all levels is underpinned by what is called ‘Political Correctness’. It is invented to be the means to stop minorities being ‘upset’ by what people say, but it is, in fact a very powerful form of mind programming. It is also an insult to the ‘minorities’ it is supposed to be ‘protecting’.

What parallel of child-like stupidity does it take to change the term ‘black coffee’ to ‘coffee without milk’, or ‘black pudding’ to ‘breakfast pudding’, so not to upset black people? What scale of disdain of the 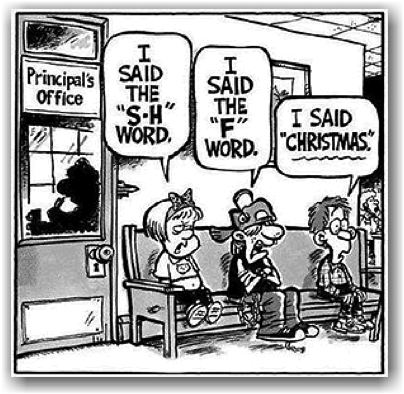 intelligence of black people does it take to think they could give a damn? Other ‘potentially offensive’ phrases being banned by the government departments and tax-payer-funded organisations include whiter than white’, ‘gentleman’s agreement’, ‘black market’, ‘black looks’, ‘black day’, ‘right-hand man’, and ‘master bedroom’. ‘Christmas lights’ changed to ‘winterval light’ to stop non-Christians being offended.

The British police authorities don’t buy British Rover cars anymore, because buying anything British, including British cars, was overtly nationalistic and could be considered offensive by vulnerable, deprived and ethnic minority groups in British society. A bakery manager had the name ‘gingerbread men’ and changed it to ‘gingerbread person’. A customer claimed a supermarket was being racist by selling ‘thick Irish sausages’. It actually had to be pointed out that the word ‘thick’ referred to the size of the sausages and not to the mentality of the Irish people. So ‘brainstorming’ had to be changed in ‘thought showering’ while the reaction of the epileptics was that they are not offended by ‘brainstorming’. It is a priceless example of the genre and encapsulates the depth of lunacy to which ‘PC’ has descended. The government’s stance on the issue is:

“We take equality and diversity issues very seriously. It is important to us not to offend people and we are sorry if through trying to avoid this, we have indeed caused offence to the very people we were trying not to offend. If epilepsy association finds the term perfectly acceptable, then we welcome this clarification. If however, the term does in fact offend even a small minority, we would encourage people to get in touch with us.”

The French government is even introducing a law that could leave married couples with criminal records for insulting each other during arguments. It is the first country to ban ‘psychological violence’ between married and cohabiting couples. The law is expected to cover any kind of insult, including repeated rude remarks about a partner’s appearance. ‘Offenders could be fined, electronically-tagged, or even jailed’. Confirming the Illuminati’s principle of ‘divide and conquer’.

All this is part of the psychological game plan to make people watch every word they say in every situation, even with their partners. It is a form of mental and emotional surveillance in which everyone is a potential ‘Big Brother’ to everyone else.

Political Correctness appears to be quite a modern phenomenon. It is only during the last few decades that it has really broken the surface and expanded to the insane levels seen today. In fact its origins go back at least to the time of WW1, and it was being planned in the shadows long before that. The Illuminati, led by the House of Rothschild networks, want to transform global society into a ‘one world’ dictatorship and to achieve this all diversity has to go.

“The reptilian-hybrid families have destroyed diversity in government, banking, business, the media, medicine, and virtually every other aspect of society. Organisations like Common Purpose are there to eliminate diversity of thought and perception among those who administer these institutions of government and law enforcement. They are targeting the destruction of ‘cultural’ diversity.”

This is where political correctness comes in. Its goal is to dismantle the diversity of language, view, and culture until all that is left is a bland, empty blob of coagulated banality that will pass for ‘human society’. Words that mean anything will be banned and people will be frightened to say anything without a careful choice of language to avoid punishment for offending anyone. Look around and you’ll see, it is already happening, and happening fast. Maybe you’ll recognise this?

This is only part of it, but the common themes that continually recur are seen. They refer to huge immigration to destroy ‘national identity’. And remember how Dr Richard Day told the meeting in 1969 that long-established communities would be destroyed by unemployment and mass immigration. This is the real reason for the borderless EU and why the USA is withdrawing border defences with Mexico in preparation for the borderless North American Union.

None of the issues mentioned are for the benefit of the people. The Illuminati don’t care about

homosexuals, any more than they care for the children they abuse while claiming to protect them. Rothschild-Illuminati fronts like the Anti-Defamation League (ADL) are not concerned with racism. They simply use it to justify more control, suppressing freedom of speech and introducing ‘hate laws’ to make your opinion a criminal offence in which truth is no defence. Where there is no racism, the authorities simply invent it to justify their ‘solutions’.

“Sarcastic racist comments against Mexicans were posted on a website of The Wayne County Star newspaper in New York State in 2009 and the paper traced some of them to internet protocol addresses at the Department of Homeland Security. These are far from isolated incidents – they’re the norm. The ADL is a Rothschild front that connects into another Rothschild operation called political correctness. This is not about protecting anyone from either racism of offence. It is about social breakdown and division so that a new order, their order, can be introduced.”

And here another twist in PC: David Cameron said he hopes to see a British-Asian become prime minister of the UK in his lifetime, adding that there were “too few people from ethnic minorities in top positions.”

Now you’ll see why the Illuminati network, including the CIA is the major force behind the drug-running, and secret foreign interventions to initiate wars and the like. So the CIA organised the Columbian drug barons into cartels to make them easier to deal with. The global drugs market is also a prime source for the funding of covert operations, the so-called ‘black projects’ – black which politically incorrect is! – Projects that cannot be financed from ‘on the record government’ sources. Well-known politician are up to their eyeballs in these drug rackets. The purpose is over and over again, everywhere you look, the breakdown of society, creating conflicts to end cohesion that all result in fear, stress and loss of identity and direction. As fear and stress close people’s energetic centres that otherwise should allow them to use these as weapon against them, but we can remove that from within our sense of freedom through consciousness and knowledge.

This virtually small group of wealthy “elitists” that come from a very controlled bloodline is destroying planet Earth. They have an agenda of planned genocide even if it means having to live underground, taking their slaves – we the people – for food with them. Many of us have awakened and realize that the cabal feed off of us humans and they lie to us in order to keep us complying with their rules. The simplest way to free yourself is to remove your energy from their grid.

Some people are pulling their money out of banks and others are not paying credit card bills, fines, and tickets. Some people are trying to live “off the grid” and are starting communities where they can grow their own food and barter without money. Some are selling their houses to avoid paying mortgage interest or taxes. Many are realizing that materialism is one big trap and are letting go of things that weigh them down. People who once worked in an Illuminati field such as banking, oil and gas, media, etc. are finding other careers. Many people have stopped watching television and have even removed these from their homes.
There are a number of ways to consciously pull you out of the system that has a hold on the majority of the planet. Realizing what the system is comprised of, by making conscious choices to get removed from that system, and helping others to educate and support what is termed “peaceful non-compliance”.

Make your mind shift; they the Illuminati are seeking to enslave all of us, whatever the religion, race or colour of the skin. Their worst nightmare is our non-compliance – the refusal to accept their lunacy to which ‘PC’ has descended, to pay taxes, or leave homes when banks foreclose on them; plainly refuse to comply with our own enslavement in any form.

The system cannot cope if this is done on a massive scale. And that makes the point to undertake these 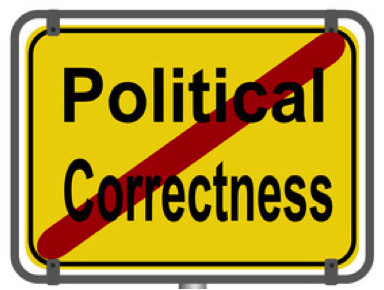 actions by all of us. Instead of compliance, we need non-compliance, this is a peaceful protest without violence, because of the difference in tune by not complying with what is unfair, unjust, or targets our freedom and that of others. This approach doesn’t refuse comply in a spirit of hostility, rage or violence, but with love and laughter – and an unshakable determination not to cooperate with our own enslavement.

The next phase will be the governments’ action to draft people to police the citizens on behalf of the Illuminati, under the guise of community service or civilian security force, which are nothing more than a scam that must be refused to join.

We need to start getting together, decline conformity with their alternative words for the likes; black coffee, brainstorming etc. join local currency and barter schemes that can operate outside the system. Mass protests are an option as long these are peaceful, but need to be part of the campaign of non-violent non cooperation, not the focus of it. But above all start with not accepting and complying with Political Correctness, as it is going to trim down your freedom of speech.

Watch below video to see the younger generations’ interpretation of the New World Order and the Illuminati. The group Anonymous that on 5th of November last millions of people over the whole world activated to protest in a friendly manner against suppression, mass surveillance, austerity and social injustice in over 400 cities worldwide. United in face and values, hiding behind the stylised Anonymous masks, activists flocked the streets in the UK, China, and the US, just to name a few. 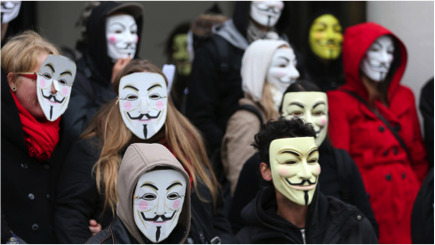 In the video’s presented in television broadcasts you’ll have watched rioting too from youngsters with a capuchin over their head, but that were government primed provocateurs waiting in the streets to start riots, because governments are powerless against non-violent protestors. The government want to see riots and looting, they want to see chaos, because than they can act with force and eventually apply curfews. Organisers of peaceful demonstrations are warned about.