The most powerful form of dictatorship and control is the one you cannot see and not being aware of that it exists. Nowadays people are given the illusion of freedom by being allowed to vote every four years or so, but behind the scenes the same few are in control whichever party of government officially is voted into office. Democracy is supposed to be rule by the majority, which is a tyranny in itself, but it is not even that. It is the dictatorship by the few hiding behind the smoke screen of a ‘free and open society’. Every person elected from the left or the right is ultimately controlled by those few and it doesn’t matter which one is elected and put in charge, the cabal of the elite brotherhood dictates them about what and how to be done. In fact it really doesn’t matter whom you vote for, the hidden hand pulls the strings of those who appear in charge to making decisions. The whole idea is to deceive the people that they are free when they fundamentally are controlled. Nobody rebels about not being free when thinking to be free. When you are in a cell and you can’t see the bars people think they are free to leave whenever they want. But if you are in a cell and see the bars you know you’re in a prison. If you are in the cell and can’t see the bars you think you are free to leave, until you try it, that is, what most people never do. Governments talk endlessly about ‘Freedom’ and the ‘Free World’ because they are selling the prison without the bars. What they say is nonsense of course, but we people have to believe it, otherwise we might realize that in truth we live in a one-party dictatorships controlled by a few. 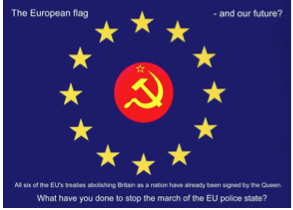 Look at how the EU establishment is destroying our lives. An unelected bureaucracy called the European Commission that mirrors the Soviet Union’s Politburo, control the EU and proposes all the ever more restricting laws. These are then discussed at secret meetings of more bureaucrats, known as the Committee of Permanent Representatives, and rubber stamped by the council of Ministers. The National Parliaments have no say in it whatsoever, while the European Parliament is only created to give an image of elected representation. It’s all a façade as the members of the European Parliament, MEPs, have an extremely limited possibility and time to even speak before their microphone is switched-off. The Union claims to be democratic when anti European MEPs are held out of the decision-making process by not making their voices heard as strongly as the pro-EU MEPs are allowed.

After The Netherlands and France vetoed the European constitution, the Lisbon Treaty in 2009 was invented and implemented to do exactly the same things as the original constitution stated. The Lisbon Treaty turned the EU into a full-fledged dictatorship with its own unelected president, 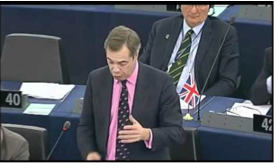 foreign policy, army, police force and bureaucratic control system. A leaked Bilderberg document from 1955 talks of the need for a single European union and currency – the euro, by manipulating for decades to bring this about. The aim of the few – elite brotherhood – eventually is to establish a global fascist/communist dictatorship. While the masses are told that they control the government, which is a complete farce. Most of the EU propaganda suffers from deliberate dissemination of information that you should know to be false or misguided.

One of the most egregious politically correct phrases in the EU phrasebook remains the “Single Market.” Once upon a time this did indeed involve breaking down barriers – according to recent electoral publicity: so wannabe MEPs could frictionless enjoy cross-border gaming. Certainly it is a delight to travel from Portugal to Poland seamlessly without border controls. Likewise, Europeans throughout the EU can enjoy a bottle of wine posted from anywhere within it. That’s so far so good. Borders are open, booze can be posted: the basics of “Bread and butter” politics is achieved – a metaphor for a superficial means of appeasement – the creation of public approval, not through exemplary or excellent public service or public policy, but through diversion; distraction; or mere satisfaction.

“As British MP Douglas Carswell notes, “the single market today is about the steady drip-drip of protectionism.”  The EU feels everything must have a regulatory framework before it can be commercially produced: imagine Christopher Columbus being forced to do a health and safety audit while providing a clear plan with aims of his journey before heading off into the unknown seeking a new route to the Indies. That didn’t make sense then, and doesn’t make sense in today’s globally competitive world either.”

Europe needs to remove its treacherous toxic corporate dictatorial relationship of cosseted big government politicians and large multinationals that spend fortunes lobbying the Brussels machine. The system has failed to deliver the requirement for dynamic growth: it should be a simple lightly regulated free trade zone, nothing more, and nothing less. However it turns out that free trade is stifled from the top down by large multinationals, that eventually will drive Europe backwards to a new dark age while Asia leaps forward.

For a thriving prosperous Europe to re-emerge, Brussels crumbling edifice of centralized insanity and micromanagement must be dismembered. The EU needs to fuel free trade with a vast reduction in the top down red tape that is preventing innovation. Otherwise, “the league of self-interested multinationals and misguided big government will create a new Ming dynasty. Mandarins over-regulated China into regressive tyranny. The EU’s Ming dynasty have produced so many stifling regulations, even their pottery isn’t as memorable as medieval China.”

Europe is busily contributing another nightmare chapter to economic history. The Europhile single currency mania promised a prosperous destiny. Brussels’ hype has instead delivered a festering economic disaster. Mediterranean citizens are frustrated at economic bulimia: crazed austerity following spendthrift government. Even Germans are unimpressed that they have suffered library closures and other Teutonic civic dysfunction in order for Berlin to help bail out their southern neighbors.

The European Parliament is at the most productive part of its four-year cycle. Instead of adding more stifling rules, politicians are out seeking re-election to the ridiculous Brussels/Strasbourg gravy train. But for the moment Europeans are spared the indignity of more useless micromanaging regulation destroying employment and the economy for at least two months every four years.

“The end May pan-European elections will see a broad swathe of apathy from east to west, despite desperate federalist attempts to stir up interest. In one empty ploy to create electoral momentum, three leading political groupings have nominated candidates who might gain one of the posts marked ‘president’ within the staggering unaccountable Brussels bureaucracy – other groups have sensibly heaped derision on the idea.” 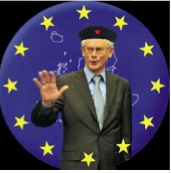 At least one form of Euro-harmonisation has been achieved. “All three deluded ‘presidential’ candidates are essentially impossible to differentiate amongst each other. As swathes of online videos demonstrate, most Europeans can’t recognise any of them.” So three people who are of the same dull caliber, as today’s unelected colorless president Herman Van Rompuy, are fighting this false form of presidential election.

“These dull, wonkiest candidates maintain a blithe regard to the fact nobody has ever heard of them. They are so similar that there is barely a cigarette paper of difference between them.”

Each is at the center of an electoral charade/conceit: crisscrossing Europe campaigning for a presidency which will eventually be decided at one of those lavish dinners where national leaders traditionally suspend democracy by turning the system of proportional representation in distributing jobs to equal nationalistic weight, instead of on merits, to be assigned to key posts.

“Meritocracy is very much secondary to Europhilia in Brussels, as evidenced by Britain’s Cathy Ashdown, whose occupancy of the foreign portfolio has resembled an artless prank.” Regardless of the ‘popular’ vote, expect the various presidents to be chosen via the usual behind closed doors botch up, as Angela Merkel already has clearly hinted.

How will growing Euro-skepticism influence the new parliament? In a direct swipe against democracy, the usual EU rules will apply: ignore the problem, ridicule the complaints and press for more Europe! Given that the answer is always “More Europe!” the three leading parties will suspend left-right ideological differences to concentrate on their single state delusion.

Given the fact that the European Parliament could be 25, even 30 percent explicitly critical – if not outright skeptical – of the EU’s vast failings, one may wish to ponder just how the EU can claim to have any remote attachment to the democracy it wishes to impose on others when its own process has become a caricature completely resembling the Soviet Union Politburo. Meanwhile Europe continues to waste taxpayers’ money in the search for President Nobody and to elect arrogant selfish MEPs more interested in the copious easy money than the job.

In view of the upcoming EU elections, citizens who love their freedom and want to preserve it, should take note that now they have an important and unique opportunity to vote against the EU. You do every freedom minded citizen a favor by sending this link to friends and acquaintances. If all EU citizens do not rebel now against this massive and expanding EU dictatorship, without any doubt our future is extremely bleak. PEOPLE WAKE UP – ACT NOW!

Europe – The theft of democracy – 5 min.