Bilderberg a bridge too far

Prince Bernard of The Netherlands sixty-years ago, in 1954, chaired the inauguration of the secretive Bilderberg group in Oosterbeek, a suburb of Arnhem in The Netherlands. This first conference led to the signing of the Treaty of Rome, which started the European Economic Community (EEC) three years later. This venue was highly significant, being the same spot where a decade before the British army had 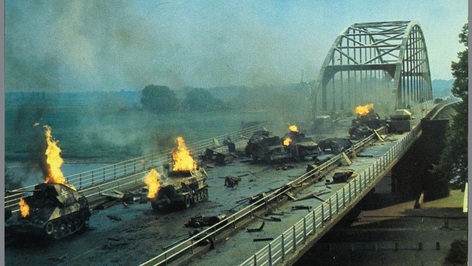 suffered around 10,000 casualties in one of the last Nazi bloodbaths of World War II. As later turned out; Bernhard had given the game away and when it looked like, despite his treachery, the brave allied soldiers might have pulled it off, then Carrington and his corps of tanks approaching from the south grounded to a halt in Lent just north of the river Waal for ‘an eighteen-hour tea break’. Whatever way looked at it, now sixty years on, the ‘coded’ message from that first Bilderberg meeting should be clear – ten years after the war, the Nazis were back. Or seventy years since the Arnhem slaughter and sixty years since the first Bilderberg conference, the EEC has become the EU – NATO’s new feudal oligarchy of Western banksters and multinationals owned and fully controlled by the bloodline illuminati – and the big political parties as well as almost everything that moves both sides of the Atlantic.

To be more specific: Prince Bernhard of the Netherlands was born into the German aristocracy. He joined the Nazi party at university – then the SS – when he married into the Dutch royal family, he shelved his black SS uniform just before the war started. Thereafter his old Nazi friends invaded his newly adopted Holland in 1940, he fled to Britain with the Dutch Queen Wilhelmina, while his wife, Princess Juliana with their children took refuge in Canada.

As a former SS officer the Admiralty’s wartime spymaster, Ian Fleming (MI5) who scrutinized Bernhard, signed him to the British army as a trusted Dutch liaison officer.

To liberate The Netherlands from German occupation and to end WWII, Field Marshall Montgomery’s daring airborne operation, the biggest in history, specifically designed; as special Operation code named ‘Market Garden’ went ahead on Sunday September 17, 1944. But most of this carefully planned operation was leaked to the Germans. Bernhard in his most important job in 1944 as liaison officer for the pending Arnhem deliverance, also supervised the Dutch resistance underground in the run-up to this liberation of the northern part of Holland, abused his authority in betraying the Dutch people by sending ten days in advance a Dutch spy to let the Germans know and prepare their resistance fighters to attack on the western allies moving to the Rheine Bridge. Resulting that, “the British paratroopers at Arnhem were quickly split in two and surrounded by German forces containing self-propelled guns, tanks and fanatic SS troops, ‘who happened to be resting nearby’. Nevertheless Frost’s 2nd battalion held on to the bridge leaving the rest of the 1st Airborne Division surrounded in what the Nazis called the ‘Hexenkessel’, in Arnhem’s suburb Oosterbeek.

“On Wednesday 20 September, 1944, as British airborne Colonel John Frost’s remaining paratroopers were being mauled by SS Panzers at the Arnhem Bridge, the tanks of the Grenadier Guards, along with US paratroopers, were tantalizingly close (just 15KM south of the Arnhem bridge), destroying the last German defences down the road in Nijmegen.”

Ironically, that was under commando of a “young captain, who in later life was also to chair the Bilderberg meetings, named Lord Peter Carrington who was leading the Grenadier battle group of Sherman tanks as they took the penultimate bridge over the river Waal in Nijmegen. At 8 o’clock that evening, he was just a 20-minute drive from reinforcing Frost at the Arnhem Bridge, and victory. But although they still had eight hours or so left before the Arnhem Bridge would finally fall into German hands, Carrington’s force, along with the Irish guards, of a hundred or so tanks inexplicably stopped, just over the Nijmegen Bridge in the village of Lent, for an eighteen hour rest.” After the war, SS Panzer Division General Heinz Harmel ridiculed Carrington saying, “The British tanks made a mistake when they stayed in Lent. If they had carried on it would have been all over for us.”

The Bilderberg’s first 1954 venue chaired by Prince Bernhard – ironically again -took place in Oosterbeek, about 5 KM away from the Rheine bridge in Arnhem – Holland, apparently highly significant, being the same spot where a decade before the British army had suffered nearly 10,000 casualties in one of the last Nazi bloodbaths of World War II. For which Bernhard had given the game away, but despite for his treachery, the brave allied soldiers might have pulled it off. – Pause a moment before reading on, – to think about the significance: Bernhard the prince of the Dutch people – deliberately killed 10.000 young soldiers, and created the severest hunger winter in western world history in the northern half of The Netherlands, in which hundreds of thousands innocent people starved from lack of food, shelter, and heating. It maybe blows your mind as all is verified, so the evidence is convincingly; authorities in charge cannot be trusted, then and now!

It is tradition that people trust their government, they think they bother about their fate. This is an absolute fallacy; others rule the world. Behind the scenes of the official rule, the bloodline illuminati designate the fate of this world, a secret group of people who know each other well and appoint themselves and their successors. Their power exists by virtue of unconditional confidentiality.

In his book “The True Story of the Bilderberg Group,” Daniel Estulin writes, “in 1954, the most powerful men in the world met for the first time” in Oosterbeek, The Netherlands, “debated the future of the world,” and decided to meet annually in secret. They called themselves the Bilderberg Group with a membership representing a who’s who of world power elites, mostly from America, Canada, and Western Europe with familiar names like David Rockefeller, Henry Kissinger, Bill Clinton, Gordon Brown, Angela Merkel, Alan Greenspan, Ben Bernanke, Larry Summers, Tim Geithner, Lloyd Blankfein, George Soros, Donald Rumsfeld, Rupert Murdoch, Blair, Brown, Cameron, Osborne, Balls, other heads of state, bankers, members of European royalty, arms industry, big oil, media barons influential senators, congressmen, parliamentarians, the Pentagon and NATO brass…”  “This Group is now “a shadow world government… threatening to take away our right to direct our own destinies (by creating) a disturbing reality” very much harming people’s welfare. In short, Bilderbergers want to supplant individual nation-state sovereignty with an all-powerful global government, corporate controlled, and checkmated by militarized enforcement.” The Group’s grand design is for “a One World Government with a single, global marketplace, policed by one world army, and financially regulated by one ‘World (Central) Bank’ using one global currency.” Their “wish list” includes:

“Today, Americans would be outraged if UN troops entered Los Angeles to restore order; tomorrow, they will be grateful. This is especially true if they were told there was an outside threat from beyond, whether real or promulgated, that threatened our very existence. It is then that all people of the world will plead with world leaders to deliver them from this evil… individual rights will be willingly relinquished for the guarantee of their well-being granted to them by their world government.”

The Bilderberger-Rockefeller scheme is to make their views “so appealing (by camouflaging them) that they become public policy (and can) pressure world leaders into submitting to the ‘needs of the Masters of the Universe.’ ” The “free world press” is their instrument to disseminate “agreed-upon propaganda.”

Bilderbergers, Trilaterists, and CFR leaders back it as another step toward global integration and won’t “stop until the entire world is unified under the auspices and the political umbrella of a One World Government, a nightmarish borderless world run by the world’s most powerful clique” – comprised of key elitist members of these dominant organizations.

In April 2007, the Transatlantic Economic Council was established between America and the EU to:

The ones who say, “What other choice do I have than to trust our leaders?” have chosen not to open their eyes and mind on the road to world domination by a few, they are not willing to think for themselves, by joining the growing number of citizens* that are united against this upcoming transformation of our world, in revealing the rotten mindset that only serve one plan, cull the population by 80%, destroy civilization and make the rest serfs to the bloodline elite.**If you’re still not convinced, watch this video, which validates it all:

From – Money out of nothing – 17th instant:“Quoted from a secret protocol from the CFR in 1950: “We shall have World Government, whether or not people like it. The only question is whether World Government will be achieved by conquest or consent.” As reward, “…an enormous cache of gold at their disposal” This enormous cache of gold belongs certified to the people of the world. Karen Hudes explains in detail in below video.Karen Hudes is a 21 years veteran at the World Bank, in charge as banker and general attorney. She knows the financial world inside out and has hundreds of high-level personal contacts, multi-lingual, and an extremely conscious pushing forward personality.

Dr Rath
Dr. Rath called on the people of Germany and Europe to take responsibility for building a democratic Europe for the People and by the People. Describing how widely available scientific research on natural remedies already makes it clear that the incidence of common diseases can now be reduced to a fraction of their current occurrence, he explained how the building of a new global health care system, based on the prevention and elimination of diseases, is now possible. Dr. Rath stressed, however, that this stunning “world without disease” will not be handed to us on a plate, because each disease represents a billion dollar market for the Pharma Cartel and its political stakeholders in the Brussels EU politburo. As such, if we want to create a world without disease for our children, and us we must all act now.
https://www.youtube.com/watch?v=6GZlKxrmdyA