The world is in a structural depression and will remain so. QE didn’t help ending the crisis, although it didn’t hurt the economy either, it only affected asset prices. No credit-based money has ever survived an entire credit cycle, and this one will be no exception. The bubble created by this generation’s unprecedented surge in spending, could not be sustained because the people who first drove the spending are now saving. Even worse, they’re no longer borrowing for big-ticket items either; the action that influenced spending the most. Like all bubbles do, this one has to burst too!

The world’s three major central banks – U.S., Europe, and Japan – have embarked on a massive financial experiment. They have created a gigantic amount of money out of thin air and used it to purchase mind-boggling quantities of government debt. The U.S. central bank owns a pile of bonds equal to 20% of U.S. gross domestic product (GDP). Japan’s central bank’s pile of debt is equal to 40% of its GDP. Europe’s central bank owns bonds worth nearly $4 trillion, or more than 25% of its GDP. Total world debt inclusive derivatives amounts to 1 quadrillion (1015)! Certainly, there won’t be a way out of this debt mess. When the financial system collapses, nothing will change in the real world. No real estate, land, factories or people will vanish just because trillions of debt slavery instruments called US Dollars, Euros, Yen, etc. are deleted from bank computers. There will be forces to reboot the system on the basis of a merit-controlled substitute by and for the people. 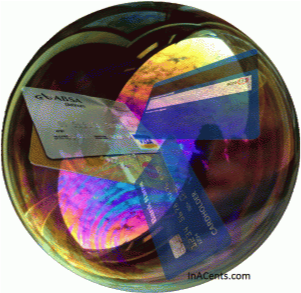 QE has finally come to an end, but public comprehension of the immense fraud it embodied has not even started. In round terms, this official counterfeiting spree amounts to $3.5 trillion − reflecting the difference between the Fed’s approximate $900 billion balance sheet when its “extraordinary policies” incepted at the time of the Lehman crisis in 2008 and its $4.4 trillion of footings today. That’s a lot of something for nothing. It’s a grotesque amount of fraud. The scam embedded in this monumental balance sheet expansion involved is nothing compared to the hidden indirect manner by which new central bank reserves supplied to the banking system impacted the private credit creation process. As now is evident, new credits issued by the Central Banks can result in the expansion of private credit to the extent that the fractional reserve money multiplier of 10 is operating or simply generate excess reserves which cycle back to the Central Banks – as in the present instance is not the case. If QE is history, most likely so is the bull market on Wall Street. The party is over. Stock, bond, and real estate prices go back to where they came from.

The Fed has already given out the word that, although QE may be breathing its last breath, its offspring will live on. “They will not be selling their roughly $4.5 trillion portfolio of bonds – or even allowing it to expire of natural causes. In the normal course of events, these bonds would mature and then – as all of us will – disappear. But Janet Yellen tells, the Fed will reinvest maturing funds in new issues.” In other words, it will continue to soak up new bonds, helping to keep a lid on yields. An economy that depends on debt needs more and more of it to get the same buzz going. The first time a lot of credit may help, but later it is hurting an economy. As debt grows, it becomes harder for the economy to grow, because the resources needed in the future have already been consumed in the past.

Currently, there are about $150 billion – 10- to 15-year bonds in circulation in the US, from these the U.S. central bank owns more than half. Likewise, the Fed owns nearly half of all Treasury bonds dated 20 years and beyond. By lowering long-term bond yields, the Fed has artificially reduced the cost of capital by an unbelievable amount. And by making it much cheaper to borrow, the Fed has enabled virtually all borrowers to gain access to the bond markets. Proven by the record-high issuance and record-low nominal yields in the high-yield – “junk” bond markets. In June, corporate borrowers added $30 billion in debt to their balance sheets – an all-time single-month record.

There too is a colossal bubble that has formed in emerging-market debt. “A brilliant New York hedge-fund manager pointed out that between 2009 and 2012, nearly $400 billion flowed into emerging-market credit markets – about four times more than average rates over the previous 10 years.”

Economists claiming to know how all of this will end are lying. Nobody knows how and when it will end. Not even former Fed Chairman Alan Greenspan. What he told was frightening: “He said that the central banks have no idea what they’re doing and that they will not be able to control the inflation that will 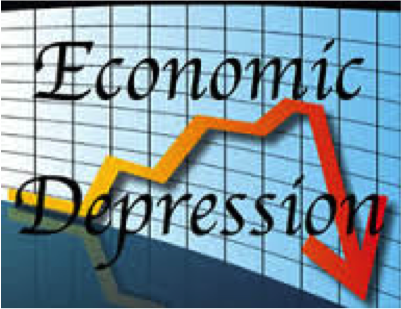 inevitably result from this massive experiment.

So what should you do? The world has arrived in the late rounds of an enormous global bubble. The banks have propped it up with a printing press. But it can’t go on forever. All around the world, credit structures are in place that can only function as long as the central bank buying continues.

Central banks have proven adept at keeping these ridiculous credit structures in place. But there is a cost. And sooner or later, something will break… because capitalism doesn’t work when there’s no cost of capital.

Global liquidity is determined by the current account of whatever country’s currency is used as the world reserve currency, which is the U.S. dollar. For more than 40 years, the U.S. has recorded large, and growing current account deficits with the rest of the world. This flooded the world with dollars, typically held in the form of U.S. Treasury bonds. These bonds are the heart of the world’s banking systems, making up more than 60% of all reserves.

The Fed has been buying back large quantities of U.S. Treasury bonds. With the ‘unintended’ (?) consequence of a huge decrease in global liquidity. Sooner or later, this is going to cause a big problem for countries like Turkey and Brazil, who owe foreign creditors dollar-denominated debts. Turkey owes foreign investors $386 billion – roughly half of its GDP. About $160 billion of these debts come due over the next 12 months. And unlike the U.S. or Japan or Europe, Turkey can’t simply print away these obligations. This trap probably is intentional, as the cabal now is able to confiscate Turkish resource, as frequent readers may remember.

“People are oblivious to the fact that it’s QE-infinity, that all the major central banks around the world are promising inflation. Once upon a time, central banks promised price stability, and they were willing to put interest rates up to 5, 6, 7, and even 8 per cent to maintain stable prices. Now they’re saying that stable prices are dangerous! This is the best fundamental environment ever seen for gold. While the dollar’s days as the world’s reserve currency are numbered. When the dollar is no longer accepted as the reserve currency, what’s going to take its place? It’s not going to be the euro; it’s not going to be the yen. Eventually it is going to be gold…” 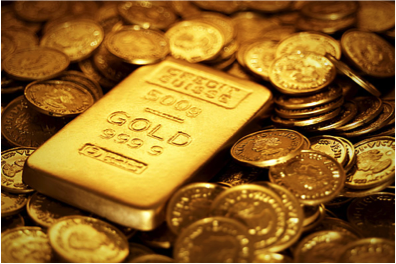 Alan Greenspan as the initiator of QE, – of course doesn’t give gold recommendations, but he recently offered his view of future gold prices. When asked where gold is going, Greenspan mused that it would be “measurably” higher in five years because of Federal Reserve quantitative easing (QE) that has served as “kindling” for an “inflationary explosion.” He himself is warning of a market correction and is recommending investors start looking into buying gold. – And that should scare you far more.

Consequently Russia is buying gold that accounted for 59% of central bank gold purchases in the third quarter of 2014. Russia and China, in fact are busy converting their foreign exchange dollars into gold. Contrary to the western economies, Russia has only a small accumulated national debt, implying that this will not be a drag on future growth, as is likely to be the case in the US, EU and Japan. Russia also has an advantageous tax system, with a top 13% rate of income tax.

If Putin decided to back his currency partially with gold, this should hurt the US dollar as it suddenly faces competition from a credible, gold-backed currency, it is likely that other central banks diversify at least some of their dollar reserves into interest-bearing, gold-backed roubles. Countries importing oil from Russia would have an additional incentive to do so as they would be able to pay for Russian oil imports in roubles and avoid the sanctions.

The indirect upward pressure on US interest rates would be perhaps small initially, but even a small rise in US interest rates would spell trouble for a US economy that so highly is leveraged to low rates. Growth would slow. The Fed could try to offset this by engaging in renewed QE, but that could add fuel to the fire, resulting in aggressive selling of dollars in the foreign exchange markets. In an extreme but hardly impossible scenario, the dollar could lose reserve status entirely, something that would be devastating for the US economy.

While a sharply weaker dollar would help US competitiveness and exports over time, it would crush the dollar’s effective international purchasing power – e.g. for oil and 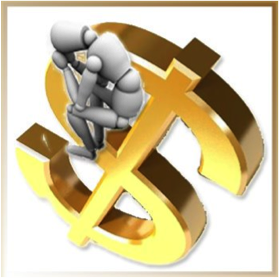 other resources – and result in soaring consumer price inflation. The combined negative impact of higher interest rates on growth and rising consumer prices on inflation would make the stagflationary 1970s look like a picnic.

The combination of economic currency war leads to multi-polarity and the instability of the current global monetary equilibrium, and is highly likely to result in at least a partial if not full remonetisation of gold, with an associated large rise of the gold price. Gold is the ideal way for countries to settle their trade imbalances in a world in which trust in currency stability is lacking, and gold makes the necessity for a reserve currency obsolete.

Accumulating reserves that can be instantly devalued by trading partners in a currency war is not a rational policy. Yet something must function as a reserve asset if trade is to take place at all. Gold provides that ‘something’ as supply is stable and it cannot be arbitrarily devalued. Backing currencies by gold would thus greatly increase trust and, thereby, facilitate international trade.

Putin is not a leader to be taken lightly and we should pay attention when he says that it his desire to end the ‘dictatorship of the dollar’, as he did just last week. Perhaps he will indeed play the gold card and thus kill two birds with one stone: shore up the rouble and Russian economy on the one hand; dethrone the dollar on the other. A period of international monetary and associated economic chaos might ensue, but with Russia suffering already under unwelcome sanctions and thus with relatively less to lose, Putin might calculate that now is the time to make his move.

To be continued in Part 2 – When Interest Rates Rise

Is the Value of your Money About to Change?

Is a family of Asian elders about to spell the end of the Banking Cabal through a worldwide monetary reset? Or is the global economy about to be consolidated even further? One way or another, the value of your money is about to change… watch below video to find out.