Simply put, the bankers control the government. This has been the case ever since the formation of the Federal Reserve, and it was further solidified with the removal of the gold standard in 1971.

From How the Bankers Stole America: For the most part, the American public believes that the Federal government receives money via the taxes collected from the citizens. This money in turn is what pays for all of the services and programs needed to keep the United States functioning. However, this is not the case at all, and instead, not one penny paid to the government by the people actually pays for any services or programs. Which system more or less with insignificant variations is in place in the EU and the privately owned ECB?

The money collected from the citizens goes directly to the privately owned Federal Reserve. This is the way that the Federal Reserve actually works: The Federal Reserve loans money to, and buys the debts of the United States government. However, the banks do not really have the money so when they need it, they just print more. The money that they print is not worth anything because there is nothing backing it. In the past the United States Dollar was backed by a “Gold Standard” and that was what determined the value of the currency.

Whenever a person hears the term, “Federal Reserve,” they assume that it is a government agency, which controls the finances of the government. Not so fast, the Federal Reserve is actually owned by private banking interests. In 1913 President Woodrow Wilson signed into law the “Federal Reserve Act.”

How did this happen? It was conceived in 1907 at a secret meeting in Jekyll Island, Georgia, attended by Senator Nelson Aldrich (whose daughter married John D. Rockefeller, Jr.), representatives from the Rockefeller-owned National City Bank and J.P. Morgan & Co., the Assistant Secretary of the Treasury, and a few others. Out of this meeting came the Monetary Commission Report and the Aldrich Bill. 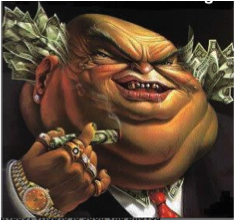 J.P. Morgan then financed both sides of the presidential election in 1912. And when the Republicans failed to get it passed, the Democrats sneaked it through after Woodrow Wilson took office on a hasty Christmas vote in 1913 as a measure to restrict Wall Street’s power. Note: Things are always framed as being in people’s best interest.

The Federal Reserve (like the ECB) has never been an agent of the government. It is a creation of the bankers meant to control the currency. From Gary Allen’s famed 1971 classic: None Dare Call It Conspiracy:

But while wars and revolutions have been useful to international bankers in gaining or increasing control over governments, the key to such control has always been control of money. You can control a government if you have it in your debt; a creditor is in a position to demand the privileges of monopoly from the sovereign. Money-seeking governments have granted monopolies in state banking, natural resources, oil concessions and transportation. However, the monopoly, which the international financiers most want, is control over a nation’s money.

Under this system, observed Reginald McKenna, President of the Midlands Bank of England, in 1939: “Those that create and issue the money and credit direct the policies of government and hold in their hands the destiny of the people.” Once the government is in debt to the bankers it is at their mercy.

It’s clear from this; governments cannot control the banks because the banks control the governments. “When J.P. Morgan spawned this plan a century ago, the national debt was $5 billion. Wilson promptly entered WWI and drove it to $25.5 billion. Roosevelt and Truman drove it from there to $260 billion during the ’30s and ’40s. After 1965, U.S. debt began to increase faster than GDP…

“There have been Establishment bankers in every single presidential administration since Wilson. How have they faired? The bankers use this control of government to write laws and make decisions in their favor. This is why the banks got a bailout after destroying the economy while people were left to struggle. This is why the banks get to manipulate LIBOR and – precious metal markets, only to face paltry monetary penalties, while ordinary citizens – like Madoff – are incarcerated at the highest per capita rate in the world.

This is why the banks get to launder money for terrorists and drug cartels and rogue states, and can laugh in the face of the Justice Department. This is why nearly every bill is filled with pork that further enriches corporations and the banks that own them. This is why the banks have absolutely no interest in helping small businesses and citizens out. They’ve even set it up so they profit by making more and more people dependent on government – there aren’t 40-some million Americans on food stamps by accident. Guess who administers the food stamp program? It’s not the government. It’s JP Morgan.

More people on welfare equals more lucrative for the banks. They have an incentive to keep ordinary people down. And judging by the bank accounts of millions, they’re doing a damn good job. They also have a vested interest in keeping people believer in “The System,” in the dream of more prosperity. Because the fiat money people get, is only worth something, as long they believe it’s worth something. They don’t want you holding precious metals; they want you out there racking up credit card debt, student loans, and mortgages to keep the interest payments coming. They want your entire retirement wrapped up in funds and stocks they control and get a percentage of.

One of the best ways to protest this is to buy precious metals. Hopefully people WAKE UP on this and exchange their savings for gold and silver, as long it remains possible.

Five things you can and should be doing to fight this financial terrorism:

A recent poll showed that criminals prefer their victims to be unarmed. So become member of a shooting club to legally own a gun and possess the ability to use it under duress.

We live in a bizarre world, managed by corrupt and lying leaders, -intentionally- making staggering policy mistakes, in which they themselves seem to believe:

Here a few examples to underline how economic distortion caused by ultra-low rates work out in practice: Take robots. At zero interest rates, a business can borrow money and replace an employee with a robot. Labor costs go down. Profits go up. But debt goes up too. Who cares about that?

At ultra-low interest rates energy producers can drill in marginal areas for marginal output of shale oil and gas. As long as the capital costs are held in check by ultra-low rates, almost any return on investment looks good. But for the time being: Independent producers will spend $1.50 drilling this year for every dollar they get back. Writes Bloomberg.

Shale output drops faster than production from conventional methods. It will take 2,500 new wells a year just to sustain output of 1 million barrels a day in North Dakota’s Bakken shale, according to the Paris-based International Energy Agency. Iraq could do the same with 60 cents.

Artificially low interest rates make capital too cheap. It is borrowed too easily and spent too easily. The result is over-speculation, and over-investment.

Banks are a proxy for credit bubble fears, writes the FT: “As credit markets continue to grow rapidly, concerned regulators are targeting banks, which now hold little credit on their balance sheets, to eliminate risk.”

Gerald Celente: Banker Suicides Prequel to Global Collapse – The onset of the great depression of the 1930’s brought a spike in banker suicides, Will Rogers noted of the time, “When Wall Street took that tail spin, you had to stand in line to get a window to jump out of, and speculators were selling space for bodies in the East River.” The cartel; CFR, Bilderberg, Rockefellers Rothchilds and JP Morgan eliminate bankers who will not go along with the new world order (NWO) it has nothing to do with suicides. If necessary US government apply mind control technology to drive these people to their death…

Authorities lie and deceive their citizens covering up reality. Virtually all markets are rigged. Oil should have been twice today’s price, under these economic circumstances.