The manipulation seen in Libor, Eurobor, securitized mortgage-backed investments, metal warehousing, silver and gold, and virtually everything else of value, paid off. HSBC’s nearly $700 billion of money laundering for terrorists and drug cartels was profitable. “The six largest banks in the United States — JPMorgan Chase, Bank of America, Citigroup, Wells Fargo, Goldman Sachs, and Morgan Stanley — have collectively gotten 37% larger since the 2007 recession they have fueled started. The U.S. banking system has $14.4 trillion in total assets. These six largest banks own 67% of those assets.” The truth is these institutions are hardly banks anymore…

Right now, four of the “too big to fail” banks each have total exposure to derivatives well over $40 trillion. Goldman Sachs’ exposure to derivatives is over 281 times more than their total assets. These banks own oil pipelines, power plants, metal and commodity warehouses and distribution systems, and ocean-based shipping companies. The list goes on, and it grows more disturbing. 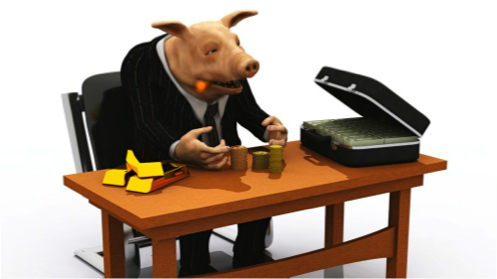 Even, selling securities designed by those who know they will fail and bet against them has been justified. For higher profits these “banks” use taxpayers money and people’s deposits – virtually interest-free tax-dollar loans. The only people who aren’t profiting from the use of this wealth and capital are the people that injected anything of value into the system.

There are 6,885 other banks, the lowest level since at least the Great Depression. These small players are being ravaged by rules that squelch competition and reward risk. Banks with $10 billion or less in assets control under 20% of all bank assets, yet account for just fewer than 60% of small business and personal loans. But the rules are stacked against them and in the favor of the massive, global financial institutions that pretend to be banks as they ratchet up leverage and risk in industrial companies and exotic derivatives.

The first financial lie of this century was: “The Committee continues to believe that an accommodative stance of monetary policy, coupled with robust underlying growth in productivity, is providing important ongoing support to economic activity.” Said Greenspan in 2000. Thirteen years later there is meager or no result at all.

“One would think,” Ron Paul laments, “this (100 years FED) anniversary would elicit some sort of public recognition of the Fed’s growth from a quasi-agent of the Treasury Department intended to provide an elastic currency to a de facto independent institution that has taken complete control of the economy through its central monetary planning.”

“We are embarked on a unique experiment in monetary manipulation,” Jim Grant tells the German business weekly Finanz und Wirtschaft. “That kind of central banking might be more accurately called central planning.”

“If you ask economists, they will tell you that price controls are a very bad idea.” – “But that’s exactly what these mandarins at the Fed are doing,” Jim Grant says. That is, the Fed is manipulating the most important prices of all — interest rates. Only two weeks ago, the Fed declared the fed funds rate would remain near zero “well past” the time the unemployment rate falls to 6.5%, from its current 7.0%.

The result is a profound drag on progress. “Interest rates are so low that companies, even in a very bad way, can survive,” Grant says by way of example. “That reduces in an unintended fashion the dynamism of our economy. “In a dynamic society, entrepreneurs start things and other entrepreneurs finish them or bankers finish them for the entrepreneurs because the entrepreneurs have failed. Without failure, there really can’t be any success. Otherwise, you have a futile system of permanent state-sponsored enterprises.” But it’s worse than that:There’s the Fed’s pathological fear of deflation.

The Fed has become a cartel with membership privileges to steal your wealth into the hands of the very rich. Quantitative easing has re-inflated the entire banking system. The Fed assets have ballooned from around $900 billion in 2008 to nearly $4 trillion in less than 5 years. The Federal Reserve manipulation of the dollar has undermined the lives of millions of people. It has driven down the standard of living for the average person in two key ways. First, the average household is earning less money at a time when prices are increasing. Second, it’s nearly impossible for people to protect the value of any extra cash they can save. The cash that is left in bank accounts will buy less next year than it does today.

In short, the Federal Reserve has changed the markets. It has also changed how to invest. There are considerations today that would never have been imagined 20 years ago. It is no longer enough to study business cycles and company fundamentals. Investors have to consider the unintended consequences of quantitative easing… Contrary to its mandate of “stable prices” – assigned in 1978, actually it has an official inflation target of 2%, while unofficially trying to achieve 4% inflation, in accordance to Currency Wars author Jim Rickards.

Central bankers “never make a distinction between deflation and progress,” Grant says. “In the last quarter of the 19th century, thanks to everything from the electric light to progress in the process of steelmaking or the telephone, prices and costs fell for the better part of 30 years. Real wages went up, some people suffered, many didn’t, society progressed and people got richer… By insisting on trying to raise the price level, the Fed is in effect resisting the progress of our time.”

“We are reaping the noxious effects of a century of loose monetary policy,” sums up Ron Paul, “as our economy remains mired in mediocrity and utterly dependent on a stream of easy money from the central bank.”

Paul is inclined to give the lawmakers of 1913 the benefit of the doubt. “Had legislators known then what we know now, we could hope that they never would have established the Federal Reserve System.” Today, however, we do know better.” We know that the Federal Reserve continues to strengthen the collusion between banks and politicians. We know that the Fed’s inflationary monetary policy continues to reap profits for Wall Street while impoverishing Main Street. And we know that the current monetary regime is teetering on a precipice.”

That’s dreadful. So what can you on Main Street do? Tell your friends and they theirs how the world is manipulated to the detriment of all the people. Wake Up all of you, and make it known that we people don’t accept these lies and tricks anymore!

The Fed can’t really control the economy. It can influence it. Fixing interest rates at any level other than that chosen by willing borrowers and lenders, the Fed distorts the price of credit – and the price of just about every other financial asset that is priced off interest rates. 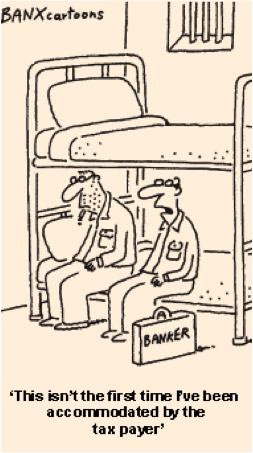 Distorting prices always leads to problems – either shortages or surpluses. By fixing rates at ultra-low levels, the Fed is stealing from one group and giving to another. The middle class, savers and working people lose wealth. Hedge fund managers, bankers, zombies – and, of course, Feds and Central Bankers gain.

That’s why the rich are getting richer as everyone else loses ground. They call it a “stimulus” program. And they’re right: It’s very stimulating for those who get the money.

There’s always gold. “When the world gets a full-on glance of the new Fed Chairman Yellen and understands the measure of the policies that central bankers will likely continue to implement,” Grant says, “the gold price will go up a lot against the Dollar.”

And remember:The price of gold may well fall – even significantly. But the value of gold won’t change at all. For gold investors who understand gold’s most unusual feature – its timeless and unchanging utility – a bear market in the nominal price is a wonderful gift. But for most, it will bring heartache.

Former World Bank Attorney Karen Hudes, interviews with Greg Hunter where she discloses many interesting things by following the money. Notably Obama would like to act differently but knows if he doesn’t follow the elite’s instructions his life in danger is. The IRS is being used to funnel money to the Vatican – Jesuits. She confirms Vatican’s Jesuits are in bed with “governments” – now owned by banks – which promote fake terrorism news to manipulate you.