Panic in the banking industry

More Panic than is shown:

At first glance, the European Central Bank’s QE program appears to be working. Asset prices are up. Old bubbles, like the property market in Spain, are reflating. But look closer and you’ll see that things aren’t going as planned. Euro bonds suffered a steep sell-off. The euro was supposed to weaken to help boost European exports; instead, it has rebounded against the dollar. – Europe’s banks are bleeding. A rumor is going

around that rating agency Fitch is going to downgrade dozens of EU banks. – Worse, Greece says it will default on June 5 next, prepare for a financial earthquake around early October next, as it will take about three month to declare Greece in default, either by the IMF or ECB. – Meanwhile, the ECB is trying to paper over these problems. It will speed up it QE bond purchases, this month and next.

Therefore, hedge fund managers were invited for dinner in London with ECB executive board member Benoît Cœuré, to offer them a ‘head start’ on market-sensitive information. – Cœuré told about the ECB’s plan to accelerate its bond-purchasing program – before the information was released to the public.

The hedge funders did what anyone with a smart phone and some inside information would do. They placed their bets before the rest of the world found out about these plans. – More precise this is called insider trading that actually is illegal. At least if it came from a private individual, he would be in big trouble. Be assured, these rules don’t apply to central bankers.

The suicidal credit-based monetary system is corrupt and self-destructive. It only works by increasing the amount of debt in society, it works only until the debt bubble blows up. – The world is changing too fast for governments to keep up; the programs, and institutions are worthless scams. Worse, they produce outcomes contrary to their stated goals. As for example: Health care programs do not make people healthy; they make them sick and dependent on the drug industry. – Defence industry spending doesn’t make people safer; it funds drones, clumsy interventions, false flag operations, and assassinations, which create more enemies. People end up not only poorer, but also less secure.

Walls of bureaucracy, taxes, paperwork, and regulation make business so difficult that new start-ups businesses, which are good jobs and real wealth virtually, are impossible.

The fractional reserve banking system, with all of its unfortunate attributes, is made critical to the world’s financial system as it is currently structured. – World’s governments and central banks will do everything they can to maintain ‘confidence’ in the financial system. To do so, they must prevent deflation at all costs. And to do that, they will continue printing up more dollars, pounds, euros, yen, and more. The pyramided leverage is constructed all-over and everywhere, once a default occurs it cascades and destroys the whole economy.

The “fractional reserve” system has to be legislated that’s why it can’t work in a free market, and consequently can’t work where banknotes are redeemable in a commodity, such as gold; the banknotes have to be “legal tender” or strictly paper money that can be created by fiat.

Modern-day civilization is at stake here, chiefly because of some wildly unsustainable practices within the financial system at large. And for the optimists amongst us, buying into all the political nonsense about economic progress, well, people are quickly losing faith in the monetary system too.

In the aftermath of the greatest financial catastrophe known to the Western world’s post-Depression era, many economists, CEOs, small-business owners, entrepreneurs, politicians, and citizens alike held on to a false hope that the stock market collapse of 2008 would prove to be an awakening for the white-collar criminals on Wall Street.

Perhaps they would see the error of their ways and understand that they were tearing away at the very fabric of what keeps our society functioning healthily. Maybe, just maybe, they’d get a glimpse at the lives they were destroying in a vain attempt to quell their own insatiable greed.

But if you’ve ever read Machiavelli’s The Prince, you understand we’re dealing with the most fallible human desire here: the desire for power and the willingness to do anything to acquire it, manifesting cruel relentlessness to keep it. – The bankers, criminal or not, are the ones currently wielding all the power in “the system”.

Power corrupts. Bankers are powerful people. They want it all and are willing to risk it all to keep it all.

“Whether they raise interest rates or eventually fire up the old printing press again in an insane round of QE4, the notion that we’re in a recession-like state (or will be quite soon) is a reality you need to accept; the sooner, the better.”

Gold is near its three-month highs. And with investors getting nervous that the stock market is topping, the next gold bull market could be around the corner.

Ultimately, there are two choices:

Those are not appealing options. But again, that’s why there is gold.

It is impossible to tell what the Fed will do, or exactly what will happen as a result. But you’d be crazy to blindly as 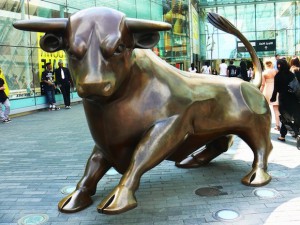 sume that the economy, the stock market, and the dollar, euro, etc. would just keep on rising. It doesn’t work like that. Markets don’t move in just one direction. Six years into a bull market that’s delivered higher valuations than most companies deserve. The US is a year and a half into a dollar rally that’s really starting to bite them. They’ve got an economy that’s been struggling to regain its balance.

Not so sure about what to do? Buy gold and silver. They are cheaper than have been in years and much cheaper than they will be years from now.

“Gold is doing what it’s supposed to—and this is just the beginning,“ says Senior Precious Metals Analyst Jeff Clark. – Ray Dalio, leader of the largest hedge fund in the world, would probably agree. He recently said, “If you don’t own gold, you know neither history nor economics.”

Gold bulls are suddenly coming out of the woodwork. Germans, fearing a Eurozone breakup, are piling into gold. – Bank of America says, “It’s time to hold more cash and gold.”

How much gold does China own? Traders really want to know. Many think that China has quietly been buying lots of gold, to bolster its currency’s case for becoming to participant into the IMF’s SDR basket, or a “reserve“ currency.

“We won’t find out until at least October, when China updates its official gold numbers. Of course, China doesn’t always tell the whole truth. Today, it officially admits to owning 1,054 tons of gold. But Senior Precious Metals Analyst Jeff Clark thinks it really owns at least 4,000 tons. If Jeff were right, it would really surprise the market. And if we find out that China has been quietly accumulating massive amounts of gold more, “it could light a fire under the gold price.”

“I think the amount is somewhere between 10,000-14,000 tons of gold. If that’s true then that turns the light bulb on over people’s heads that China has been buying all this gold and someone’s keeping the price down artificially. Something has to change there… It also opens up the rest of the world’s eyes that China is a player because they’ll have more gold than the U.S. says they have.”

“Alisdair Mcleod believes China may have 25,000 tons or more, Bill Holter believes 10,000 tons or more is a safe number. When the collapse hit the market this autumn, China has to “recapitalize” their gold in Yuan as their only option to survive, in order to fill the black holes created by defaulting US Treasuries and other assets held. “He who owns the gold makes the rules” so it China has the ability to PRICE IT.

Reversely as the U.S. wanted low gold prices as a show or display that their fiat currencies were “good”. – A gold price maybe even higher than it should be will give China’s PBOC more power initially to allow more room to inflate and grow. As for the dollar and other Western currencies, they will be re-valued downward versus the Yuan, which gives gold priced in dollars and euro’s an extra increase in pricing.

Europe will lead the world into Economic Totalitarianism because the EU commission is desperate to retain the euro. If the euro collapses, so will 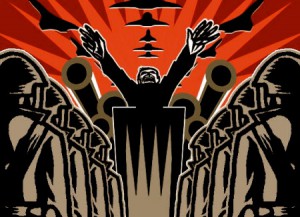 Brussels. Tens of thousand EU jobs exist solely because of the euro. – Since Brussels will not reform, as Einstein correctly put it:

The whole idea of negative interest rates is just following the same Keynesian concept that lowering rates will stimulate demand. The missing element is faith. “If people do not believe they will make even 1%, they will not pay 0%.” While they keep lowering rates under the pretence to ‘stimulate borrowers’, they are wiping out the retirees who now cannot live from their savings, reducing their spending, and destroying the entire idea of pensions and retirement. The lack of confidence prevents new businesses from forming and therein results in the lost generation of youth who cannot find a job. The elderly are forced to work, so there becomes a shortage of jobs, resulting in higher unemployment among the youth. 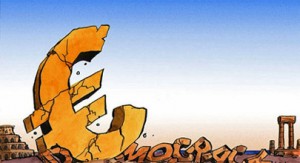 Brussels knows they have a real crisis in European banking. However, this crisis is monumental and cannot be solved with the same line of thinking that has caused this insane nightmare. Obviously, eliminating cash will prevent people from causing a bank run if a member state defaults. The smart money is trying to get out as fast as it can by buying precious metals, diamonds, rare art, coins, stamps, antiques, real estate, and other kind of hard assets. This is the only way out, for when they eliminate cash, chances are they will impose CAPITAL CONTROLS and prevent the movement of money out of a country. This line of thinking will lead to the next traditional step.

The dictatorial bureaucrats in Brussels, not their RKM superiors, are fighting for their very own existence. They will incite civil unrest, set to rise sharply between autumn this year and 2017.

“Geopolitically, Obama undid everything that was done to make the world safer. He ruined the European economy with his sanctions against Russia, and created the alliance that now exists between Russia and China in military action and drills. The USA might be able to defeat Russia on a conventional battlefield, but they cannot defeat China on the same terms. Meanwhile Germany, the strongest economy in Europe, is constitutionally forbidden to have a big military force. Brussels is now talking about trying to form a European army to further their power. It is all posturing to insanity.”

Brussels will lead the charge to shut down cash, as is known. Moving into the next stage of massive deflation – not hyperinflation. Government are moving to control everything; people will not being able to buy or sell anything without government approval. The Economic Totalitarianism is advancing our doorstep.

When Brussels realise that they cannot eliminate cash without the rest of the entire world doing so simultaneously, money will move out even faster from Europe, driving the dollar to excessive highs.

They will most likely follow the same script as they did in Cyprus, imposing currency controls to prevent money from fleeing. And than the EU will implement capital control. The EU is in the meltdown mode of Western Civilization, all because of debt, and the dictators from Brussels.

Unsound Banking: Why Most of the World’s Banks Are Headed for Collapse.