How Stock Markets are rigged

What is going to stop a Central bank from simply printing its own currency and trading it on the currency market for dollars, euro’s or yen, to be invested in the stock market or real estate market? And next, what is going to stop central banks from printing up money competitively, in a mad rush to own the world’s largest companies? Not much as the Central Bank is not regulated, even not by their governments. Central Banks are considered independent because its monetary policy decisions do not have to be approved by the government or anyone else. So, the chain of deception, humbug and larceny has corrupted the entire economy. From top to bottom, every financial decision has been twisted in one direction or another.

The Official Monetary and Financial Institutions Forum (OMFIF) calculates that central banks around the world have lost out on $200 to $250 billion in interest income on their bond portfolios.Ironically, the ultra low bond-yield environment the central banks have created is behind the shift by central banks into stocks.

It is against the law to man 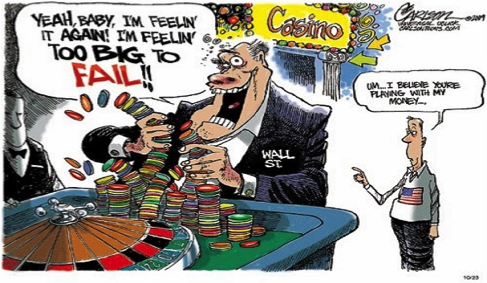 ipulate stocks. But the Central Bank does it in broad daylight, lowering interest rates on bonds to increase the relative value of future earnings streams for the stock market although trickily and unreliable. Nonetheless it seems to be working. The stock markets have reached all-time highs even as the source of its profits – the economy beneath it – struggles to find its footing.

The intention – apparently – is to impulse the economy by pumping up the paper value of stock market portfolios – encouraging people to go out and spend on flat screen TVs, steak dinners and bigger, more expensive houses and new cars.

Why do think authorities, they know what other people should do with their money is never been fully revealed. Nor is it at all clear that the world would be a better place if people made riskier investments. Now, central banks get a piece of their own baked cake. Thanks to their meddling with bond yields, they are now being forced to make up for shortfalls in income by investing in overpriced equities.

With money created out of nowhere they buy equity stakes in companies. Otherwise, real people who earned real money providing real goods and services might have owned these companies, consequently more of the world’s real wealth shifts from the people who make it – to the people who take it.

So the central banks are major buyers of stocks. In other words, central banks are victims of their own depressed interest rates. Feeling the pinch, they move more and more of their portfolios into equities. The OMFIF says “global public investors” – including central banks – have increased investments in equities “by at least $1 trillion in recent years.” A well-informed banker told: “The Federal Reserve Bank bought right after 9/11 for large sums of money the crashed stocks.”

And there will be more to come, private investors, deprived of a decent return on their savings, buy stocks. Corporations borrow from the banks to buyback their own stocks. Central banks also buy stocks. Stocks go up. Seeing what a success they have made, they all buy more!Has any finer system ever been developed to manipulate the stock market? Has any dumber plan, more doomed to disaster, ever been devised?

It is outrageous, for which is no other polite word – that will put this extraordinary situation in the right light. The Central Bankers were able to make a terrific mess out of the economy – but now they can raise stock prices. Where comes the money from, used by central banks to acquire equity stakes in real businesses? If it is their own earned money one hardly can complain, they can spend it as they wish.

But most of you meanwhile know better. Central banks didn’t earn their money honestly. They simply digitized it into existence. What gives them the right to create money, like counterfeiters? Banks – and their central bank backers – have a government-granted monopoly on money creation. It’s the most stupid and protected franchise ever granted in this world.

And now, Central Bankers have been pumping up the money supply far in excess of GDP growth. They create money out of nothing. Not a drop of sweat. No muscle ached. No sale was made. No profits were registered. On this miracle of something-for-nothing rests the whole financial system. Without it, the stock market and the economy would collapse in a heap, and there is no sign that policies are about to change.

On the contrary, there are more and more signs they will remain with us to the end of time or until the whole system blows up – whichever comes first. A change would do the world a favor. The longer this game goes on, more debt is created, more misallocation of capital more waste, more dishonesty, this all gets worse by the day.

But there is competition as not just western central bankers are playing this game. China’s State Administration of Foreign Exchange is a part of the People’s Bank of China (PBoC). According to the OMFIF report, it’s now “the world’s largest public sector holder of equities,” with $3.9 trillion under management. And that money, too, is flowing into stocks. As the OMFIF puts it, “In a new development, it appears that PBoC itself has been directly buying minority equity stakes in important European companies.”

This leaves the PBoC with a bunch of foreign currency – mainly dollars and euro – which then is plowed back into overseas assets denominated in those currencies – including stocks. In short, there’s a lot of money out there, and there will probably be a lot more coming.

Japan faces “twin deficits” – on its current account as well as its government budget. Central-bank money printing, too, must finance these. So, Tokyo issues bonds. The Bank of Japan (BoJ) creates some new yen to buy them.

The following year, the government needs to borrow more. It issues more bonds. The central bank issues more yen. Part is used to pay interest to the BoJ to redeem the bonds as they mature. What’s a poor central banker to do? He has cash. He has to do something with it. Why not invest in equities? According to a report in British newspaper the Daily Telegraph, the Bank of Japan buys about $200 million of exchange-traded funds whenever it sees the stock market index stumbling.

And who’s going to complain if he buys stock? No one. Instead, he will get thanks from the government, who are grateful to them for financing their deficits. They will get applause from investors, who will be pleased as they see their investments go up.

Managers in the corporate sector will be delighted; their bonuses depend on higher asset prices. The 1% will get richer. And the other 99% will not know what the hell is going on. One of the elegant features of this latest hustle is that it does not benefit ordinary people. 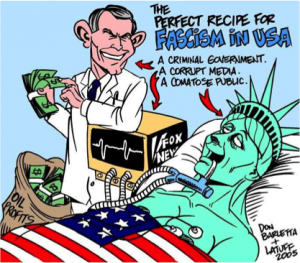 As central banks create new money – that’s passed around the financial community – and ultimately ends up in the equity markets. Most people never see this money, much less spend it. Their hands never touch it. And in the official statistics consumer prices never rise. What is the Result? No complains from ordinary people, the media or investors. In short, this a grand slam of deceit. The World Series of financial disaster will begin next. But that could take a while longer.

Western central banks have generally worked this scheme discreetly. Not so much the Chinese, whose blatant gaming of the system points up its flaws for everyone to be seen.

Georgetown University historian Professor Carroll Quigley styled himself the librarian of the international bankers. In his 1966 book Tragedy and Hope, he wrote that their aim was “nothing less than to create a world system of financial control in private hands able to dominate the political system of each country and the economy of the world as a whole.” This system was to be controlled “in a feudalist fashion by the central banks of the world acting in concert by secret agreements,” central banks that “were themselves private corporations.”

It may be the Chinese, not acting in concert, who break up this cartel. The PBoC is no more transparent than all other players in the game, but it is not an “independent” central bank. It is a government agency accountable to the Chinese government and acting on its behalf.

The Chinese have evidently figured out the game of the “independent” central bankers, and are using it to their own advantage. If the Fed can do quantitative easing, so can the Chinese – and buy up the west’s assets with the proceeds. Owning US corporations rather than US Treasuries helps the Chinese break up the US dollar hegemony.

Whatever power play is going on behind the scenes, it is increasingly clear that they are not serving we-the-people. The global central banking scheme is systemically flawed and needs to be radically overhauled.

Nicholas Larkin – Bloomberg claims that the “silver market” is a $5 TRILLION market.

STOP THE PRESSES! Please read and re-read the first sentence… if, according to Bloomberg, the silver market is a “$5 TRILLION market” (when accounting for all of the paper), those of you holding rare PHYSICAL metal will do very, very well when the price for PHYSICAL soon reflects REALITY. And another thought, why is the gold market only worth “$18 Trillion” if silver is a $5 Trillion market?? Answer: There’s a LOT MORE paper silver out there than paper gold.

You can read it for yourself right here: New Silver Pricing Benchmark Seen As Heralding A Gold Fix Revamp As Well. http://sgtreport.com/2014/06/wall-streets-five-trillion-dollar-per-year-paper-silver-ponzi/

An instructive Wake Up Call, clearly explaining the oncoming dangers, the way to prepare yourself, your family and friends for the events that cannot be dismissed anymore. The data used and analysis underlying the material represent over a decade of intensive research and study. Over that decade, its forecasts have proved increasingly validated by events like the collapse of the housing bubble in 2007, the 2008 credit crisis and the anemic ‘recovery’ since, oil prices persistently over $100 per barrel, the five-fold rise in gold prices, and many other symptoms of an unsustainable world economy reaching its failure point. Sadly, the risks warned of in this video are very real, and they are arriving now.
Once you’ve finished watching the video, please share it with those whom you think would most benefit from it. The more people we wake up to its message, the more hands we’ll have supporting us today in planning for tomorrow.

According to Gordon T Long & John Rubino, there will be a total of $2 trillion in stock buybacks in 2013 and 2014.  This sort of DUMB BUYING has totally destroyed the valuations of the stock market. This is a must see video on the amazing amount of deception in the Bond and Stock Markets. They discuss the Belgium U.S. Treasury buying as well as what is keeping the stocks markets heading to new highs as more and more bad economic news rolls in. I had no idea of the amount of stock buy-backs taking place in the market. The same mistakes are made as 5 years ago; apparently no one has learnt anything. Of course, it’s known there were stock-buy backs, but it is unknown to what degree and how this impacted earnings in such a BIG WAY. It is highly recommend watching this video and sharing it with your friends, family and associates.

“And so they (the U.S.) have told their puppet state (Germany) to shut up and come up with a different statement that they are content to leave it (their gold) with the Fed. Perhaps they had to bribe them or give them other advantage. But, essentially, they have stopped any German agitation for the return of their gold because it can’t be returned.”