Cryptos game for the Wise Investment for the Fools

The present false fiat monetary system has obstructed reasonable thinking. Humanity is struggling to maintain itself, to further the industrial and commercial activity of the world that was established when gold was money. Think about; what we have today is deliberately total chaos. Look at real estate and share prices, these are completely loose from reality. This chaos prevails because humanity is no longer in contact with the reality of the physical world: rational human thinking and activity is disconnected from those realities, due to false money numbers, that are between us and the physical world, upon which people must act accordingly to reason, which is an impossibility.

The current economy is a central bankers’ economy and not a people’s economy. This economy cannot be repaired, a new peoples’ economy will be put in its place, free from Central Banker interventions and manipulations. In short, an economy for the people controlled by the people on the basis of supply and demand, in other words; a fair-trade economy, as explained extensively in previous articles on this site.

The only special characteristic of numbers is that they move about the Internet within a carefully controlled system, that prevents unauthorised access to it. Only the owner of e.g. a Crypto-digit, can dispose of it by sending it to someone else.

When, gold returns in world’s money system, many may be confused with this change: could it be, perhaps, by opting for a wholesale, suicidal destruction of the human race, rather than an adaptation to new habits, new employments and reordering of priorities, which the rational understanding of the world will require once the mental block of “numbers-money” is removed?

Look at the stellar rise of the number of cryptos, 2.000 or more are around with every day new cryptos arriving on the scene. All this is the result of the illegal central planned central bank controlled money system, that has confiscated people’s free market aspirations. 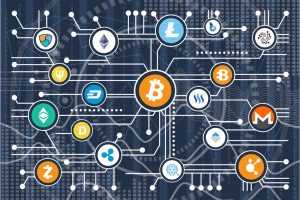 Bitcoins and all the rest of the crypto-currency pack are currencies without legal right to ownership of anything tangible. They are digits on computers, and nothing more. What is “a digit on a computer”? The definition would seem to run along the lines of “an electric charge in a computer memory”. If the ownership of a crypto-currency digits on a computer, or more exactly, on a “blockchain system” of computers, constituted a legal right to a thing with real physical value, say 1 kilo of copper, or 1 ounce of silver, or 1 ounce of gold, or any other physically existing commodity in a legally constituted depository, then there wouldn’t be a problem with such a “crypto-currency”. However, so far as is known, none of the crypto-currencies carry with them any legal right to the ownership of anything of tangible value.

In this regard, they are like today’s fiat-money, which has no relation at all to any underlying physical existing good. The crypto-currencies are regarded as valuable assets because when they were born, someone had the bright idea of saying that they were money.

That simple affirmation impacted masses of people anxious to make a buck quickly and easily, and these poor innocents are not able to think things through carefully. If something – whatever it is – appears to have a rapidly increasing monetary value, there will be thousands – or millions – of individuals anxious to get into the scheme. This has happened, time and again, throughout history. And doubtless, this will happen again ending in inevitable disappointment and losses for all these naive investors.

What distinguishes the Cryptos from all the world’s currencies today, is that the currencies of the world – the dollar, the euro, the Yen, the Yuan, the British pound, etc. – all are issued by Central Banks that regulate as carefully as they can, in other words; the price of their currencies in terms of each other.

Some people like to play with danger; they get a thrill out of snatching Life out of the Jaws of Death. There are endless ways of getting the thrill of cheating Death of its victim.

One of them is to play with the danger of Bitcoin – supposedly a “digital currency”. Those who are wise know the danger of playing with Bitcoin, but that doesn’t put them off, on the contrary, the danger incites their participation in the game, they love the thrill!

Bitcoin is not money, it is not a currency, it is only a digital game – a game that consists of accumulating electronic digits, which are supposed to represent Dollars, or some other empty – supposedly “monetary” – digits.

If you like to play with Danger, because of the thrill it gives you, you can get your kicks by playing with Bitcoins or its crypto-fellows. Cryptos are thrilling toys for the wise; only fools regard them as serious investments. Fools argue that “only 21 million” Bitcoins can be “mined” – using physical mining of gold as an example to hold in mind, in order to support the fiction that it is “the work involved” that gives value to things, a theory completely discredited many years ago.

J. P. Morgan once said: “Gold is money; all else is credit.” Gold is physically tangible; Cryptos are electronic digits, close to nothing at all, those are more “idea” than anything else.

The foolish followers of Bitcoin and other cryptos think that the present electronic age is going to last forever; they are, of course, mistaken. A great many parts of the World do not enjoy the use of electricity. Bitcoin and its followers have no meaning at all in those regions.

If and when the lights go out in your area, or elsewhere in the World, electronic digits will be quite useless there. Those who thought they had millions upon millions of “digital money” – Dollars, Euros, Pounds or whatever, will find themselves in unexpected trouble. The foolish holders of Bitcoin and its comrades will be “up a creek without a paddle”, while the owners of gold and silver coins will not go hungry.

The “sophomores” – the “wise fools” – think that the present, totally artificial moneys of today’s World are permanent; they think that the inventions of intangible fiat-moneys that are in use in the World today, will be permanent fixtures of the future.

They are mistaken, and they have plenty of company, because the old saying holds: “The number of fools is Legion”.

Gold passes from the hands of fools, to the hands of the wise. When fools have mastery in the World, gold goes into hiding, and Bitcoin and other cryptos have their day. But when the fools and their make-believe money are swept away by Reality, gold comes back into its own right. It has always been so, and always will be so.

In the case of Bitcoin, its spectacular rise in value has emerged because it is an object of a world-wide speculation; because of the Zero Interest Rate policy of the Central Banksters, the public is anxious to obtain huge profits quickly, they are pushing its price skyward. There is at present a strong majority of buyers and a small minority of sellers. Its spectacular price is disconnected from the universe of goods which serve humanity.

The lack of stability in the value of Bitcoin and for the same token other cryptos is part of the essence: that they will never achieve stability between buyers and sellers, like any other merchandise, because similar a tossed coin cannot fall on its edge. There will always be either a majority who wishes to buy, as is the case at present, or there will be a majority who wish to sell.

After the apparently unstoppable rise in value of the Bitcoin, there will inevitably come a moment when this rise will turn into a sudden and swift fall; this will happen when the sellers become the majority and want to realise their enormous profits; they will suddenly find there are no takers and the value of Bitcoin will collapse.

The stability of prices in the world of goods – the prices of copper, iron, oil, aluminium, wheat, etc., derives from the use the world gives to goods. Bitcoin and imitations are not goods, they are simply digits that move outside the purview of Central Bankster’ control of transfer of property and quantities of money – which is their only real service. Further, Bitcoin runs on an independent transfer system called Blockchain, which, has its transfer-limitations of max. four transfers per minute, while up to 1000 transactions per minute are required, and available on other systems like QFS. 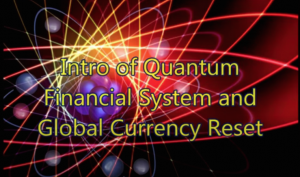 This new Quantum Financial System – QFS is run on a quantum computer based on an orbiting satellite, and protected by Secret Space Programs, to ensure that it cannot be hacked. The quantum technology was provided by the benevolent Galactics. The purpose of the new financial system is to put an end to Cabal corruption, usury, and manipulation within the banking world. The key is the prevention corrupted banksters cannot enter the system to gain profit.

In our new positive world that is dawning; only awake people into the 5th Dimension of consciousness will be allowed. There will be no rulers; all of us together will manage our own living and business. Period!