The Golden Period of Atlantis

Anunnaki present themselves as the ‘Gods of planet Earth‘

Founded on the corrupt financial system

The Galactic Federation of the Dark Forces

The dark forces have formed strategic alliances under the popular signature of the Galactic Federation, 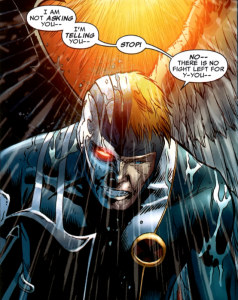 making contact with selected members of the Deep State cabal, government and Illuminati Archon bloodlines. By extensively infiltrating the secret societies, like the Free Masons, Knights Templar, Jesuits and other spiritual societies.

The propaganda of the Galactic Federation as a pro-human ET-group is used to derail the spiritual awakening of people and course them into the new age movement and their respective Mind Control based belief systems making them obedient for suppression, as happens nowadays with mask wearing and social distancing protocols.

These alliances are responsible for guiding scalar based weapons into the planetary field of Stonehenge 11th Stargate. Arranged by the Nibirians to erase the collective human race memories and most importantly to eradicate any trace of humanity’s recorded histories originating from the Atlantis civilisation. It was the Satanic Luciferian Agreement behind the tragic events that led to the Atlantean Catastrophe.

The Golden Period of Atlantis

Atlantis existed for a period of several hundred thousand years. Most of the Atlantean times were epochs of light! Only the final phase, the period from 17,500 B.C. to 10,500 B.C. was, in today’s terms, a dark but lesson-rich era.

The Golden Period of Atlantis had the highest level of Light Consciousness ever attained on planet Earth in any advanced civilisation, higher than Lemuria, and Mu. It has become somewhat fashionable to consider Lemuria as the utopian civilisation and although they did indeed reach a relatively short stage of high consciousness, the majority in that era were not really in physical bodies, but rather in the etheric deity and did not face difficulties required in the earthly physical stage. 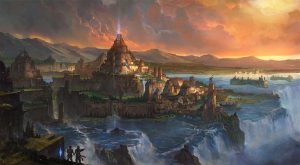 In the Golden Age of Atlantis, pyramids were three- or four-sided, depending on their usefulness, and were generally made of marble, granite, and complex crystals. Three-sided pyramids were used as antennas to attract and amplify energies and channel them into the grid of layers to power homes, factories and create energy fields for different services.

As of yet the period of the Atlantis civilisation in Earth’s history is not known, as the literature about it in the archives of Alexandria Library has been destroyed 2,300 years ago. The rulers of Alexandria set out to fulfil one of humanity’s most audacious goals: to collect all the knowledge in the world under one roof. In its prime, the Library of Alexandria housed an unprecedented number of scrolls and attracted some of the Greek world’s greatest minds. But by the end of the 5th century BC, the great library had vanished. Many believed it was destroyed in a catastrophic fire. The truth of the library’s rise and fall is much more complex.

Theosophists believed that the civilisation of Atlantis reached its peak between 1,000,000 and 900,000 years ago, but was destroyed through internal warfare brought about by the dangerous use of psychic and supernatural powers of the inhabitants. There are vague indications, that the real history may have been saved and is stored in the archives of the Vatican? Anyhow, time will tell the real truth.

Here are some of the oldest constructions built in that period of human Atlantis history, with technologies scientists still cannot explain. Judge for yourself and realise how much further ahead has been this civilisation compared to ours.

Tens or even more millions of years ago, the Galactic Federation worked closely with the High Syrian Council to serve as a Guardian race that would help to support the seeding and evolution process of planet Earth in its lowest density, called the first Harmonic Universe, or third dimensional timeline.

The Great Pyramid of Giza was built as a harmonic resonator chamber within an interdimensional portal system in which visiting space craft could time travel and access planet Earth quickly, especially if intervention was needed. During the cycle in which the Great Pyramid was built through pre-Atlantean times, the Galactic Federation was tasked to protect the Stargate portal and the ascensie within it and to intervene in case of an attack from hostile intruders such as intended and later executed by the Anunnaki resistance. 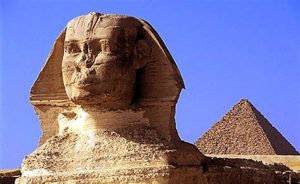 The Pyramid of Giza was a mystery school for the spiritual ascension programme of the Blue Flame Melchizedek to accelerate the DNA assembly for portal passage through the Inner Earth for which the entrance was under the Sphinx. The Blue Flame Melchizedek, were acting as the primary Archivists of Earth’s vast genetic library and timeline history, through the gnostic process of their own consciousness personification.

Some factions of the Anunnaki Melchizedek became patriarchal and had disregarded the Law of One teachings. They became increasingly hostile when they were forbidden access into the ascension chambers and were not allowed to enter the Great Pyramid.

As result, they organised a large resistance group in Atlantis with the plan to explode the protective ‘force field’ via setting off explosions in which to take control over the Giza Stargate, and to achieve their goal to enlist support of sympathisers allied with the Galactic Federation who were originally of Anunnaki lineages and felt discriminated.

During this time period, the Jehovah Anunnaki took control of the Galactic Federation and joined forces with the Ashtar Command of Luciferian rule, to prepare the final phase of the Atlantis tragedy and erase all historical records, technological knowledge and progress on Earth, thus sending the inhabitants of planet Earth back into the Stone Age.

Anunnaki present themselves as the ‘Gods of planet Earth‘ 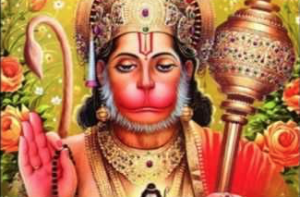 The Galactic Federation collaborated with these groups in order to achieve world domination. They were also behind the mind control propaganda by presenting the Anunnaki as the ‘Gods of planet Earth‘ and the ‘Solar System’, touting themselves as the divine angels who returned to help humanity expand their minds, thus seducing the world’s population into oppression with the aim of introducing their New World Order slavery agenda 2030.

Satanism, Freemasonry and all forms of paganism are anti-human and anti-natural. Centred on manipulation of energy and consciousness through Mind Control and deception, which is brought about through ritual-based ideology. These rituals create energy fields, vibrational frequencies, which connect the consciousness of the participants to the ‘Negative Extraterrestrial Agenda‘, of the Archon Reptile Kingdoms, and transform them into 4-Dimensional Parasites. The Archons with their base on Saturn send out AI containing Satanic belief systems to transmit these distortions to planet Earth.

It must be clear, that a revision of the history of Ancient times will have a far-reaching influence and lasting effects, as with this new understanding, it would seem that conventional statements about the origin of mankind and planet Earth are nonsense, because extra-terrestrials have played a complex role regarding the destruction of Atlantis and the evolution of mankind.

The Anunnaki are arrogant, narrow-minded, cruel, incestuous and hateful beings. Any negative adjective that can be imagined, applies to them. There is evidence that they made their slaves work very hard and had little compassion for the plight of these people.

They decided 7.000-years ago to allow humanity to have its first civilisation, known as the Sumerian civilisation. But that civilisation came only after the human genetic code had been manipulated in an attempt to drastically shorten and eradicate human life.

The Anunnaki transformed on Earth into a group of rulers known today as the Deep State Cabal. To ensure their control over the population, Kingdoms were established with Pharaohs and Kings as head that were descendants from their Archon bloodline. They built their hierarchy using mind-controlled civilian puppets that work very effectively to support and implement their rules in preparation for the eventual establishment of their New World Order.

There are tens of millions of people living on Earth who are totally in service of these dark minds, while they don’t even know it. Just, for money fame, status, and reward they are willing to carry out Agenda 2030. These individuals are found in Governments, Media, Big businesses, Education, Religion, Military, Science, Hollywood, virtually all over the place.

These puppets do not have the slightest idea that they are digging their own graves, because they have no idea for whom they are actually doing their work! They are criminally bribed with counterfeit money, and are unaware of the ultimate goal of those higher up in the hierarchy. They do not even know who these individuals really are. Every puppet involved is communicatively isolated, even up to the highest echelons, because every facet is hidden in the Occult Darkness of Black Magic, they do not know where the new world order really leads to. 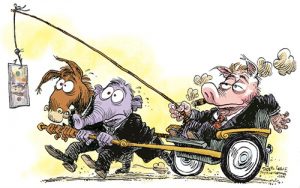 The Deep State cabal is deeply involved in the creation of an entirely new and even more disconnected human body, for all beings trapped in the Matrix of the third dimension. They are human beings reduced to a level far below what they were before, but more controllable by computers, which deprives them of their free will with no choice but do what the cabal wants them to do.

The real plan of the Deep State cabal is to get rid of the old disconnected human being, by killing off 90% of the exiting population by poisoning them through COVID-vaccinations, foods and medicines. Once, this is completed it will be impossible for anyone with a true freewill to stand up against this takeover.

Those who are not awake, are living their daily lives within the matrix system, and are quietly consenting to it, unless they speak out against it. So, you need to stand up and take action to opt out of this Matrix.

Feel encouraged to share this insightful article with everyone you know. The greater the number of awake people, the better it is for us digital warriors. Remember; more than 50% of the population needs to be awake, to successfully realise the final deadly blow to the Deep State cabal.

If you found this information interesting, explanatory, valuable, and/or insightful, please share it with everyone you know to help awaken and prepare them.

Our liberation process cannot being stopped anymore. Unite with other like-minded people will create together our most powerful force to defeat all evil minds around us.

The 144,000 Saints from the first creation of Genesis that did not pollute their DNA from race mixing with the other races including the Nephilim were saved from the flood in Lemuria approximately 72,000 years ago when the continent of Lemuria was sunk.  These 144,000 Saints are immortal and all manifest in the white race.  The 144,000 Saints have transmigrated back to earth after Adam and Eve were created and the Saints came marching in to earth.

The Saints have always been with us for the last 7,500 years along with the Elect who manifest in the white race. The Elect were created by the Logos and the Holy Spirit in Genesis Chapter 2 and are mortal. The Elect will have to go through the fire and / or the flood according to Zechariah 13:9 however Messiah Jesus will be with you, providing you are baptised in the name of the Father, the Son and the Holy Spirit, full immersion at an age of accountability, 8 years and over and accept Messiah Jesus as your saviour.

Only the 144,000 Saints will be included in the Harpazo as they already went through the flood in Lemuria, along with the babies and toddlers and the mentally disabled along with the dead in the name of Christ who will be raised first. There is no rapture of the Church. The Elect will be hidden throughout the Great Tribulation so have faith and make sure you have been baptised properly according to the bible.