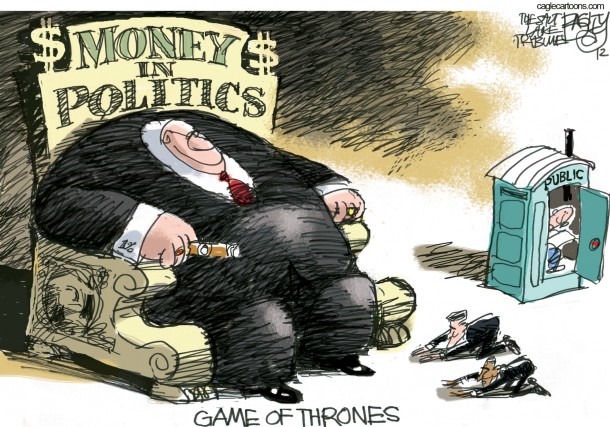 Excessive Money Printing without Inflation, how is that possible?

How the Government Scam Works

How they manipulate the economy

Money is the heart of the economy. It is the yardstick in our current 3D world. It tells what things are worth, how much can be invested, what is worthwhile and what is not. Money – especially the interest it earns – tells when to expand or contract. It tells when to work harder or to slow down. It tells which direction to follow.

For at least a hundred years, the existing financial money system has been manipulated to the hilt to keep it alive, while bringing the world to its knees through financial engineering that should have long been alarming to any well-educated expert.

But the majority of experts have been masterfully kept in the dark about the hidden agenda, despite the alarm bells ringing at every turn. A careful analysis reveals that the entire monetary system is – consciously or unconsciously – self-destructive.

The over-printing of debt money has reached its final stage of self-destruction, as debt has 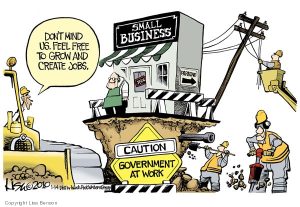 grown rampant around the world. As a result, the credit money system has gone into reverse mode. Because, of the perpetual debt spiral.

As the money needed to pay interest on the debt is not spent. Paradoxically, therefore, no liquidity is available to repay all debts. And even more ridiculous; when all debts have been repaid, there is no more fake money, currency, in circulation.

If you want to know who are the most criminal money scammers on our planet, and understand how this has been made possible, read on to the end of this article.

There is no bigger scam than that perpetrated by the central bankers. The Federal Reserve, the ECB and all other central banks have ‘illegally’ obtained the monopoly for the issue and creation of money and the quantity of money.

They can increase or decrease their balance sheet at any time without any cost, by buying or selling with ‘false’ money of assets. It is money created out of thin air and backed by ‘perpetual’ government debt. 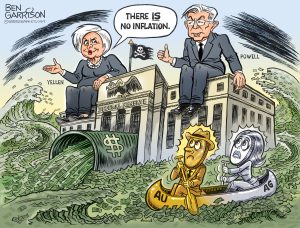 The Central Banks have increased their monetary base fivefold since 2008, while keeping interest rates at virtually zero. In other words, they have constantly manipulated the money supply and interest rates to bail out banks by financing the huge deficits through government spending.

Remember; the money supply is half of almost every transaction. By manipulating the money, they manipulate the whole economic system. The basic unit of the system is a kind of money the world has never had before, namely the post-1971 fiat dollar and later the euro. It is paper money – worth as much as people think it should be worth, managed by people who think, as time passes, it should become worth, less each time.

The amount of liquid reserves that banks must hold against their outstanding loans is now so small that “no resistance” can be offered to the amount of outstanding credit created by the system.

Banks only need to hold a certain amount to cover their “solvency ratio”. This extends their credit to many times their equity, i.e. the money of shareholders.

Money has value as long as there is not too much of it. The market can absorb a bit of counterfeit money. But there is a limit. And that limit has now been severely breached, made possible by: 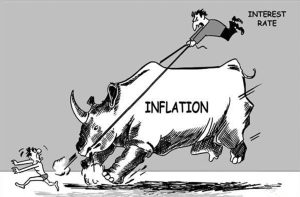 Without these two unique circumstances, the irresponsible policies of central banks would most certainly have caused high inflation, in the double-digit range or even higher.

But this situation is now coming to an end, too large amounts of money are now being printed daily to prop up the corrupt money system. Count on double-digit inflation and look at the prices of fuel at the pump to convince yourself.

Excessive money printing without inflation, how is that possible?

Governments do not have to worry about the quantity of loans. Central banks buy the government bonds – which they keep on their balance sheets – of which they pay back the interest – and the whole thing can be forgotten. And when those bonds mature, central banks can use the repaid principal to buy more government debt!

In fact, printing money without causing inflation for the now existing group of central bankers is something previous central bankers could only dream of. – Politicians, too, enjoy this ‘once in a lifetime’ opportunity for recklessness. They are able to do what no one before them could do: borrow money without paying it back. The public has not yet understood this or read about it in the press, but it will have to happen soon.

The ignorance of the people about capital, money, finance, and economics is frightening, it is the tragic ‘trap’ of fascism in the creeping ‘Big-Brother-Society’ that many people in all age groups still deny and regard as conspiracy theories, if they hear about it. This applies to all professions at every intellectual level and movement. All these people share the disease of denial compounded by ignorance and laziness to inform themselves.

How the Government Scam Works

Deliberately, every government runs on debt money, from the central bank, which they could have issued themselves without interest attached! Every day they accumulate more debt, which is called the “National Debt”. This debt consists of, promissory notes, or promises to 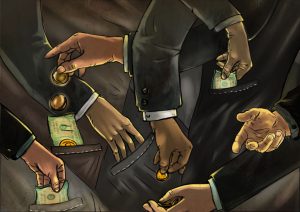 pay back the stated amount, they are promissory notes, used as legal tender, more commonly known as fiat money, which is fraudulently booked in the government’s criminal books.

If someone pays you with a fiat money note, it is effectively a promissory note, which is nothing more than an acknowledgement of debt, a debt that you accept as payment. In this way, a credit is created for the payer. It is a debt that grows bigger and bigger, and now it is yours. You never get paid until you pass this debt instrument on to someone else in exchange for buying something of value. So, the debt is used to buy something of real value.

Think about this another way; every time a debt is created, nominally an equivalent credit is created, for the same amount. In healthy accounting, debt and credit are naturally in balance. Debt and Credit must always be in balance with each other! Why every accounting system has a balance sheet! No X-billion “National Debt” can have been created, without the existence of a corresponding equal X-billion “National Credit”. Not accounting for the corresponding liquidity is a very serious and criminal fraud!

The Deep State criminals went one step further; they devised and implemented the perpetually growing debt spiral to keep the people in debt bondage forever.

But now something has changed, namely the repayment of debts. This is a big change, a huge event that creates a trend of getting out of debt.

The reduction of debt by paying it off, is a contraction. And contraction means depression. The world is going into a depression, and that is going to be very unpleasant. The end result is; that in all nations the governments will have to revalue their gold reserves, because that is all that is left for them.

They will be forced to resort to this in order to keep the trade going. And to be able to stay in power themselves. No country is completely economically independent. All nations have to buy things that others produce. And to keep world trade going, there is no other solution than to go back to gold. And, that is when the new QFS money system can be introduced, as the only right and just replacement.

There are two types of money in circulation.

Debt payments are made with debt money created out of NOTHING by that same Central Bank. This is then called ‘public debt’, which has been used for the creation of debt money. Which, is effectively a swindle, because now the affected citizens are obliged, without their knowledge, to pay off this ‘fake debt’ to the Central Bank using taxpayers’ money! 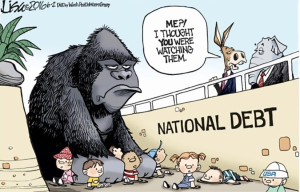 You are invited to become a member of the FWC, click on this LINK