Planet Earth is a Round Ball

Encounter with a lost civilisation in Antarctica

Readers who still believe the Earth is flat are advised to read this article, which presents scientific and historical truth. 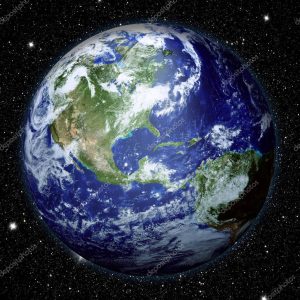 The earliest documented reference to the concept of the Earth dates from around the 5th century BC, as it appears in the writings of Greek philosophers. In the 3rd century BC, Hellenistic astronomy established the roughly spherical shape of the Earth as a physical fact and even calculated the circumference of the Earth.

This knowledge was gradually adopted throughout the Old World during Late Antiquity and the Middle Ages. A practical demonstration of the spherical shape of the Earth was confirmed by the sailboat circumnavigation of Ferdinand Magellan and Juan Sebastián Elcano (1519-1522).

The concept of a spherical Earth superseded the earlier belief of a flat Earth: in early Mesopotamian mythology, the world was depicted as a disc floating in the ocean with a hemispherical sky dome above it, and this forms the premise for early world maps such as those by Anaximander and Hecataeus of Miletus.

In 1947, Admiral Byrd flew from the North Pole to the South Pole in his small plane, but was not allowed to report until he was on his deathbed.

Encounter with a lost civilisation in Antarctica

On 19 February 1947, Admiral Richard E. Byrd left base camp Arctica and flew north. What happened during that flight? For years, rumours have circulated that during his historic flight to the North Pole, Admiral Byrd flew past the Pole to an opening that led to the bowels of the Earth. Where he met advanced beings who had a sobering message for him to convey to humanity on the surface of the world.

On Byrd ‘s return to Washington, on 11 March 1947, he was closely interrogated by top security forces and a medical team. He was placed under close surveillance and ordered to remain silent

“During his Arctic flight of 1,700 miles for the North Pole, he reported by radio that below him he saw no ice and snow, but land areas consisting of mountains, forests, green vegetation, lakes and rivers, and in the undergrowth saw a strange animal resembling the mammoth….” 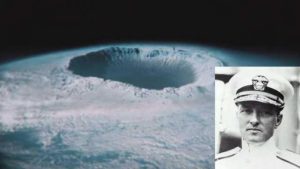 In January 1956, Admiral Byrd led another expedition to Antarctica and penetrated 2,300 miles beyond the South Pole. Radio reports at the time (13 January 1956) said:

“On January 13, members of the United States expedition penetrated 2,300 miles above the South Pole. The flight was made by Vice Admiral George Dufek of the U.S. Navy air unit.” Byrd said on March 13, 1956, “The present expedition has unlocked a vast new land.”

Admiral Byrd said in February 1947 before his flight to the North Pole,

Following are some excerpts from his experiences during his flight to the land beyond the North Pole:

“I welcome you to our domain, Admiral. I see a man with fine features and with the etching of years on his face. He is sitting at a long table. He gestures me to take a seat in one of the chairs.

When I sat down, he put his fingertips together and smiles. He speaks again softly, conveying the following.

“We let you in here because you have a noble character and are well known on the Surface World, Admiral.”

“Surface World,” I mutter half loudly! 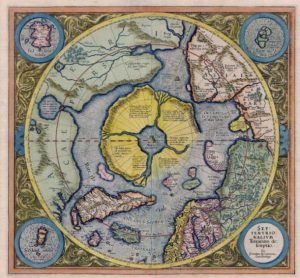 “Yes,” the Master replied with a smile, “you are in the domain of Agharta, the Inner World of Earth. We will not hold up your mission for long, and you will be escorted safely back to the surface and a long way beyond.

But now. Admiral, let me tell you why you have been called here.

Our interest was aroused because your race dropped the first atomic bombs on Hiroshima and Nagasaki, Japan. At that alarming moment we sent our flying machines, the ‘Flugelrads’, to your surface world to investigate what your race had done.

“That, of course, is now history, my dear admiral, but I must move on. You see, we have never before interfered with wars and barbarism of your race, but now we must, for you have learned to manipulate with a certain power not begotten for mankind, namely that of atomic energy.

Our emissaries have already conveyed messages to the powers of your world, and yet they do not listen. Now you have been chosen to testify here that our world does exist. Our culture and science are many thousands of years more advanced than your race, Admiral.

I interrupted, “But what does this have to do with me, Sir?”

The Master’s eyes seemed to penetrate deep into my mind, and after studying me for a few moments he replied,

“Your race has now reached the point of no return, for among you are some who would rather destroy your world than give up their power…”

I nodded, and the Master continued.

“In 1945 and thereafter, we tried to contact your race, but our attempts met with hostility. Our Flugelrads were shot at, yes, even pursued with malice and hostility by your fighter planes.

So, now I tell you, my son, there is a great storm coming in your world, a black fury that will spread for many years to come. There will be no solution within your armies, there will be no safety within your science. It may rage until every flower of your culture is trampled and all human remains are levelled into vast chaos.

“Your recent war was but a harbinger of what lies ahead for your race. We here see it more clearly by the hour…. Are you saying I am wrong?” 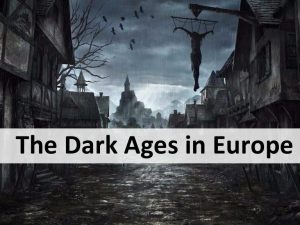 It has happened before, the Dark Ages came and they lasted for over five hundred years.” “Yes, my son,” replied the master, “the Dark Times that will now come for your race will cover the earth with a veil, but I believe that some of your race will weather the storm, beyond that I can say nothing about it.

We see at a great distance a new world emerging from the ruins of your race, seeking their lost and legendary treasures, and they will be here, my son, safe in our keeping. When the time comes, we will emerge again to help revive your culture and your race.

“Perhaps by then you will have learned the futility of war and strife…. and after that time, some of your culture and science will be returned so that your race so they can begin again.

You, my son, you must return to the surface world with this message…”

With those last words, our meeting seemed to have ended. I stood up as if in a dream… yet I knew that this was reality, and for some strange reason I bowed slightly, out of respect or humility, I don’t know why.

Under disclosure, the inhabitants of our planet will be told the truth about planet Earth, its interior, central sun, tunnels and gateways to its various inner locations as sketched in the attached image by a commander of the Galactic Federation of Light. 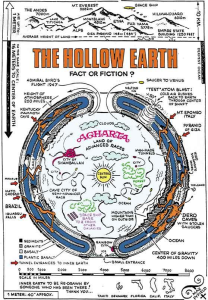 Here is a little more revelation of facts about which we have been in the dark for at least 70 years as Admiral Byrd flew his small plane right through the hollow Earth from the North straight to the South Pole. He could not report on it until he was on his deathbed. He also discovered an impressively beautiful underground city called Shamballa in Antarctica.

Dr Hermann Oberth is a respected Austro-Hungarian born German physics engineer, internationally renowned rocket pioneer, and until 1955 head of the US CalTech Laboratories. He is considered one of the founders of rocketry and astronautics. Oberth eventually came to work for one of his pupils, the former SS officer Werner von Braun, who was developing space rockets for NASA in secret underground bases.

A good example is the NASA cover-up about other worlds. NASA is a gigantic smoke screen to hide the Deep State deep space programmes and alien contacts. They have been secretly working with other alien races for 70 years, ever since the Nazis were smuggled into America under Operation Paperclip in 1947. Watch this video;

The world has long been ruled by men associated with secret societies such as the Council on Foreign Relations (CFR), the Trilateral Commission (TC) and the Bilderberg Group. All these societies can be traced back to many earlier ones, such as the Knights Templar and Rosicrucians, which evolved into the Bavarian Illuminati and the Freemasons.  It was the right-wing German Thule Gesellschaft, an offshoot of the Teutonic Knights, which formed the core of the nascent Nazi Party, that adopted the infamous Illuminati credo;

“The end justifies the means”..,

That lives on in the hearts of today’s corporate owners, commonly called globalists, who value the blending of state and corporate power, which is the definition of fascism.

All this is now becoming history, for a bright future lies ahead. The world is only waiting for the mass awakening! To be free of the Dark Forces that have ruled the world for at least 500,000 years. To sum it all up; there are holes at the North and South Pole. Most pilots know about it, but are ordered to direct their flights 100 miles away from these holes.

Feel free to share this unusual information widely, the more people wake up the sooner planet Earth will be liberated.