The answer is what John Maynard Keynes already proposed in the 1930s: an international valuable reserve asset, rules for pricing national currencies against it, and penalties for countries that run a persistent deficit. After the financial crisis there was a flood of proposals along these lines from the UN, from the economist Joseph Stiglitz, and even from the governor of the People’s Bank of China. None has gone anywhere.

The plan is to turn the IMF into a kind of super central bank… with lots of “international reserve assets” – SDRs (Special Drawing Rights) – that it can hand out to any country that seems to need them. Don’t ask too many questions. To put into simple words: The new world’s money system would be based on paper money again and managed by global bureaucrats. You’ll see immediately that it is a hopeless proposal; a super bank run by super economists, that won’t last long it will blow up the whole world’s financial system.

Any system based on paper, like the current one will blow up anyway. No paper-money system has ever survived a full credit cycle, because paper money – a form of primitive, credit-backed money – is without any discipline unlimited. That – and not a lack of international monetary reform – is why there are so many bubbles now.

When interest rates are falling – often pushed by central banks to artificially low levels and held there for an extremely long time – credit expands and the burden of debt grows. That has been happening for the last three decades. And now, the entire economy depends on something that can’t possibly continue. Debt can’t grow forever.

As long as rates stay low, the system holds together. But as the quantity of debt increases, the quality of it decreases. Debtors’ balance sheets get weaker and weaker. Eventually, the credit markets change direction. Interest rates start going up. Then the weight of all that debt comes crashing down like an avalanche. And when it gets started, there is no stopping it. All you can do is make sure you’re not in the way!

If all Central Banks start to taper their bond buying, they risk resurrecting the calamity they’re trying to avoid – a deflationary depression. So, the Central Bankers have got to keep going. The markets and the economy depend on it. Gold will glitter again!

“Earnings grow for only two reasons—revenue growth and/or margin expansion. Unfortunately, the outlook on both fronts is problematic. Margins are already at cyclical peak levels—the best that can be expected on that front is for margins to remain stable. That leaves revenue gains as the only driver for earnings growth. But you can’t have significant revenue gains in the current environment of constrained economic growth. Revenue growth is a direct function of nominal GDP growth, and nominal GDP growth has been lukewarm at best.”

The number one threat right now are rising interest rates. “And by interest rates, isn’t meant the absolute level, but the velocity of the increase, taking place at a speed the markets are currently unprepared for and businesses may not have planned for. The effect of higher rates on the housing market is already being felt in the New Home Sales number. Resulting in a 20% drop-off in new home sales in June and July, and this does not bode well for existing home sales in the coming months or in Case-Shiller home prices next quarter.” Writes the reformed broker blog.

The world’s so-called richest nations need $7 of debt to produce 50 cents of GDP. The world is bankrupt, and all of the economic figures that are being published are just a mirage of a castle built on a foundation of worthless paper money. The world can, of course, never pay back the debt with real money, and the world can’t even pay the interest with real money.

Anyone with a sane mind would realize that this whole situation is untenable, and sadly, this will end very, very badly for the world. We don’t just have an economic bankruptcy, but we also have a moral and ethical bankruptcy-taking place on top of the threat of war, and the fact that most governments are taking away freedoms and personal initiatives by making people dependent on state handouts 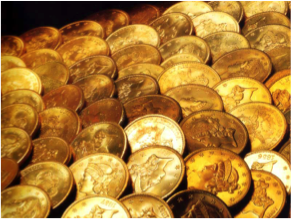 So our monetary system is doomed. It’s a 100% failure rate. No fiat currency has ever survived, now all of the world’s currencies are fiat. Consequently the upcoming shift will be the most dramatic in world monetary history. It’s going to be the world’s greatest wealth transfer in history. Therefore, it’s also the greatest opportunity in history. How high will gold go? Maloney says, “The more you study it, predictions of $2,000 or $5,000 gold becomes absurd. It’s absurdly low.”

The Derivatives blow-up is a disaster waiting to happen, people’s purchasing power will disappear overnight, and bringing down the monetary system. Be prepared, because the world is entering in extraordinary circumstances, not happened before in recorded history, eventually turning into hyperinflation. Nationalization – not confiscation- of privately owned gold is not that much likely as the majority of US dollars are held outside the USA. When foreigners get scarred and dump the US dollar that will make the disaster in the US even worse. Gold jewelry and silver are less likely candidates. If it nevertheless happens: buy for the proceeds from your gold immediately other hard assets, protecting your profit. Lots of violence and social unrest must be expected, for that reason arranges for your family emergency food stock, for at least a 3-month period.

People with personal ownership of gold and silver and 3-month emergency food in storage have the best chance to survive. Authorities are scarred to death, when society enters this stage of the crisis; riots will breakout all over the place, as many cities only have food for not more than three days. According to an agreement signed in Washington, DC last July; between FEMA and the Russian Emergency Situations Ministry, “Russian troops can now be deployed to provide security (in the USA)…” Based on the philosophy,US troops won’t shoot on Americans, but Russian will do.

Gold is at a 5000 year low, due to manipulation, but they cannot continue with that forever. That’s why gold and silver has the greatest potential for very rare gains in history, while it’s now a huge buying opportunity at least for the time being. Not wanted to be killed middleclass people must protect themselves by preparing their survival now. Another monetary system is going to be put in place.

In below video Greg Hunter goes One-on-One with precious metals expert Mike Maloney who says, “According to dividend yields, we’ve never been in a bubble as big as we are today.  So, I wouldn’t get involved in stocks at these levels. I think they’re insane.”  Maloney wrote the best-selling book, “Guide to Investing in Gold and Silver.” Maloney says real estate and bonds are overvalued. The only things undervalued are precious metals. “I think you are going to see a day when the gold price is double the Dow because we are coming off the greatest bubble in history . . . gold really hit an all-time low in the year 2000.  It’s a 5,000 year low, and we are coming off of that . . . it should be one of the biggest reversions in history.” He also predicts a new monetary system by the end of the decade. “When everything starts to fail, they will be looking around for what worked before . . . It’s going to be a global financial convulsion the likes of which we’ve never seen.”

“It’s a 100% failure rate. No fiat currency has ever survived, now all of them are fiat.  So, this shift will be the most dramatic in world monetary history. It’s going to be the world’s greatest wealth transfer in history. Therefore, it’s the greatest opportunity in history.”  Join Mike Maloney of GoldSilver.com and producer of the new video series “Hidden Secrets of Money.”

The structure of the gold market is changing. Gold is moving from the so-called “weak hands”—those who saw gold as a “trade” and/or were seeking quick profits—to “strong hands,” the ones that see the big picture and are buying for the long term.

Gold is moving west to east. You’ve heard this before, as the below graph irrefutably points to this fact—and the trend shows no signs of letting up.

The East will have an increasingly greater impact on price. As Asian countries take over more and more of the market, their influence on the price will only grow.

“The gold bull market is not over, regardless of what GS (Goldman Sachs) says. When I read their comments on the precious metals market, I sometimes wonder if they really understand it. But then again, do any of their analysts even own any gold?” wrote Mrs Chang of Casey Research.

China and India accounted for almost 60% of the global gold jewelry sector last quarter, and roughly half of total bar and coin demand. Further, both countries saw almost 50% more consumer demand in the first half of the year compared to the same period in 2012. 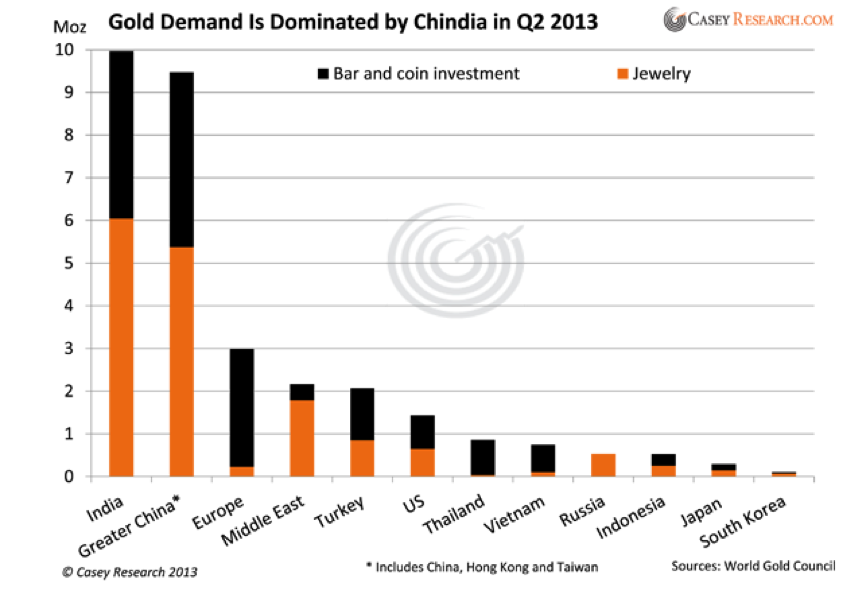 QE, QE and more QE. The Fed is propping up Wall Street, so to speak, while the “real” economy languishes. It’s investable for stock pickers. But even better buy physical gold and silver. Hold oil. The dollar will live through another time of troubles, the world is heading.