When the Spanish Galleons in the 16th century came back from the discovered New World with cargoes full of – stolen – gold and silver coins, they thought to have hit the jackpot with their bonanza. Iberia then had plenty of money, so they neglected their agriculture and their factories there was no need anymore to produce anything, because they had loads to spend. Consequently prices went up. And when the stream of gold stopped coming, the Spaniards were broke, and went into decline during the following four centuries.

After entering the then called European Economic Union in the 80s, Spain received subsidies to bring the country up to European economic level. The Socialist under PM Filipe Gonzalez spent the money on infrastructure and buildings, but too little or none on development for innovation and technologies to diversify their industries. Gonzales built his own villa next to the estate of the Moroccan King’s Palace at the Atlantic seaside coast for the price at the time of over €4 million. Although having his private jet in Spain he uses his bike to show the Spaniards his modesty. 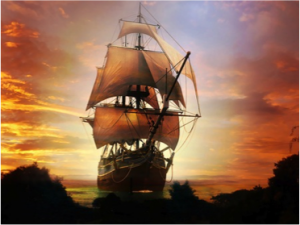 Spain’s construction activity was good 17% of GDP in 2004, when the socialists were in power again; they thought the trees would grow into the sky. When the time was still good no correction or diversification was considered. People bought houses for 110% of the purchases price mortgaged, only a signature was required, no questions asked.

Politicians, Mayors and their town-Counsellors, corrupted the system in their hunt to laundering black money into construction projects, through rings of officials in collaboration with the Mafia that was founded on swindle with construction-licences building hundreds of thousands illegal houses on protected rural estates, demolishing the pristine and naturally unique countryside.

But since 2008 the oversized constructions turned large areas of the country is in a desolate state of affairs. Numbers of politicians, promoters, developers were sent for a short period into jail and came out a short while later on bail, even notaries and lawyers amongst them. Culminating in a 27% or about 6 million unemployed workers. The result; about 2,5 million houses for sale, from which a great deal not even finished, abandoned construction sites, idle cranes and large tracks of land ruined. Without money and no ideas, socialist PM Zapatero left office and was replaced by Mariano Rajoy from the conservative people’s party on the right of the political spectrum, meanwhile in the open he and his closest allies lined their own pockets profiting from illegal bribes and corruption schemes.

Nowadays reality has arrived, the ship of state is sinking; you’d expect people would put on their life jackets and start to think about what to do now. Forget it, they look to their government for hand-outs, on which Central Banks are spending away $1 billion per hour to monetize the nation’s obligations. All the PIIGS-countries are broke. They owe combined an amount of over €7 trillion that’s still rising. 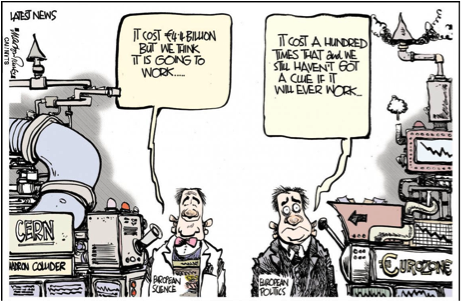 trillion. The banks in Spain are creaking like old furniture and kept alive with bogus money? Wait – what will happen when many more mortgages are in default.

They still don’t have the right idea what really must be done. Every politician suggests the usual remedies — more education, retraining and infrastructure investment. But there is no evidence that any of these would make the job picture better. The cure for this recession is a depression. It reduces asset prices, consumer prices, and interest rates. This makes it possible for investors and business people to redirect their efforts on projects that will work and put the unemployed at work.

By now it must be clear that stimulus packages for the economy, didn’t work. Any money that isn’t earned without the sweat of honest labor is stimulus. Money seems to play a destructive role in history. There are no examples – none – where stimulus produced genuine prosperity. Instead, when a nation runs into easy cash, it soon is spending more than it can afford, creating more problems. During economic decline, mediocre governments classically bounce back and forth between “stimulus” and “austerity” accompanied with lies as the recession is almost over, we see the light at the end of the tunnel.

However “stimulus” and “austerity” eventually leads to more spending and higher taxes. It never worked. So what’s the solution? Less spending with lower taxes.

Letting the rich pay, doesn’t work either. It doesn’t matter anymore, not until the entire system collapses. And that’s why this collapse is inevitable. The rate of marginal tax goes higher and higher. The tax base narrows and tax collection declines. Government debts soar, until – sooner or later – the interest rate soars because lenders realize there is no way they will ever get their money back. Then civil unrest is unavoidable.

When will all this be over? Who knows? But the odds are – not any time soon. By the time it will be out of control and Governments have fleeced the last taxpayer – then the end is near. A change for the better can follow.

Celente says: the top trend coming is war. “They are bound and determined to have war. The sarin gas had nothing to do with this.” What does Celente see coming with the Federal Reserve’s $85 billion a month of money printing? Celente says, “I believe they are going to start tapering because they are turning our currency into confetti… This can’t go on forever.” My best forecast is they are going to start tapering, but in 2014.” When they do cut back on the money printing, what happens to the market? Celente predicts, “You are going to see a market crash.” Join Greg Hunter of USAWatchdog.com as he goes One-on-One with the nation’s top trend researcher, Gerald Celente.

China’s central bank just made it easier for Chinese businesses and individuals to load up on gold.

A draft document on the People’s Bank of China website reveals plans to increase the number of firms allowed to import and export gold. In addition, ordinary folks will be allowed to bring up to 7 ounces of gold into China from overseas without having to pay a duty or even report it to customs. No word on how soon the new rules might take effect…

Meanwhile, new figures from Thomson Reuters GFMS reveal the spot trade in gold on the Shanghai Gold Exchange more than doubled in the first half of 2013. Yes, China’s big gold move is still under way…

Gold Bugs Beware: It’s official. The FED’s next chairman is chairwoman is going to be Janet Yellen.

This graph shows the near-perfect and real correlation, between growth in the Fed’s balance sheet and gold prices, recently intentionally changed by manipulations, as the original tight correlation indicate an imminent nasty bout of hyperinflation. Supported by talks about a crisis for gold bugs! Of course, selling is never an option for them…